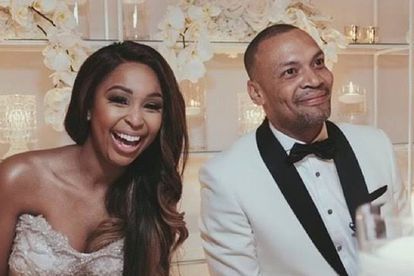 Tweeps are wondering whether an official statement slamming cheating allegations as ‘false, damaging and malicious’, was a joint one by Minnie Dlamini and her estranged husband, Quinton Jones. Image via Twitter @tnvenge

Tweeps are wondering whether an official statement slamming cheating allegations as ‘false, damaging and malicious’, was a joint one by Minnie Dlamini and her estranged husband, Quinton Jones. Image via Twitter @tnvenge

Twitter users are not convinced Minnie Dlamini and Quinton Jones’ joint statement released on Wednesday 11 May, amid cheating rumours circulating on social media, is legit.

The media personality and her estranged husband released a statement addressing the viral cheating scandal that is allegedly the reason behind their divorce. In the statement, Minnie and Quinton also threatened to take legal action against the relevant parties responsible for these allegations.

On 15 February 2022, the actress, businesswoman and TV presenter released a joint statement with her estranged husband announcing their divorce. The couple explained that the last two years had been rocky for them, this after they tied the knot in 2017.

Since then, the pair have been a trending topic, but more so this week when controversial social media entertainment commentator Musa Khawula alleged that Minnie “cheated” on her former American football player husband with businessman Edwin Sodi.

Khawula also claimed that Quinton reportedly found out about Minnie’s alleged cheating and filed for divorce. He added that she’s allegedly refusing to sign the divorce papers.

With the couple trending for more than two days as the cheating rumours were being dissected on social media, they released a statement refuting the allegations on Wednesday.

The former Mr and Mrs Jones explained that the rumours are “baseless” and “damaging”. They also threatened to take legal action as a result.

However, Twitter users are not convinced that the statement is from both parties.

On Sunday 8 May, Sunday World reported that Quinton had allegedly pulled out of their joint business venture amid the ongoing divorce. These reports, as well as Quinton’s silence throughout their marriage, divorce and the cheating rumours, are some of the reasons netizens believe the statement may be one-sided.

Others have said that they will not believe the validity of the statement unless Quinton releases one himself or posts a video. This while others went as far as claiming that the statement was put together by Minnie’s PR team.