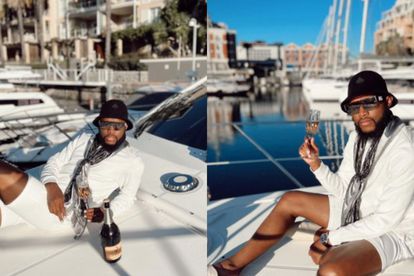 South African actor and radio personality Mohale Motaung jetted off to Cape Town as his Showmax special about his failed marriage to media personality Somizi Mhlongo aired on Thursday 4 August.

Mohale Motaung, who is the estranged husband of Idols SA judge Somizi Mhlongo jetted off to Cape Town to live his best life as seen in Instagram posts on Thursday 4 August.

From basking in the sun to enjoying champagne on a yacht, here is a look at Mohale’s luxurious vacation.

“Wine anyone ? 😌🍷 Wine farm visits at @steenbergfarm 🤍,” he captioned the post.

“Wrapping up some work before we start the day,” he captioned the post.

“But right now, I’m content to bask in the sun and glory of the world that is my own. Pool side vibes at @achotelcapetown,” he captioned the post.

“Biking my way through the world. 🚴🤍😍,” he captioned the post.

TWEEPS REACT TO ‘MOHALE: ON THE RECORD’

While The Black Door star was on vacation, Tweeps praised him for telling his truth on his Showmax special Mohale: On The Record. Take a look…

“Mohale told his truth without being disrespectful or dramatic. He just pulled out receipts and also took accountability for his wrongs. I respect him for that,” wrote @NtombikayiseBa6.

“To say I respect Mohale is an understatement. He told his truth in the most dignified way possible without ever dragging the other person through the mud. Now that is class! We can all learn a thing or two from,” wrote @me_siviwe.

“Mohale told his truth, that one from Sarafina brought his baby mama and a groupie of a friend to defend him. Mohale brought receipts and names,” wrote @Alulu25.

“I have mad respect for Mohale. He didnt play victim, he didnt disrespect anyone. He jusy told the truth qha and also admitted to his mistakes. Mad respect for him,” wrote @LisatheFoodie.