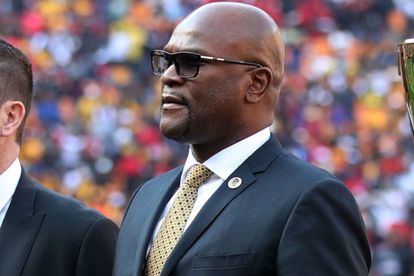 Many South Africans have headed online to pay their respects to the Ferguson family as Shona Ferguson, the husband of actress Connie Ferguson, was laid to rest. Among the people who attended the funeral was the South African Minister for Arts and Culture Nathi Mthethwa and let’s just say, locals were not happy to see him.

Today (4 August) the world watched as the Ferguson family paid their last respects to South African actor and producer Shona Ferguson. Many people were left in tears as they watched Mzansi actress Connie Ferguson say goodbye to her husband after 20 years of marriage.

While many people shared messages of support and condolences with the family, a lot of people found themselves super annoyed to see that Mthethwa was among the guests who spoke at the funeral. Many posts were dedicated to dragging the arts and culture minister.

“Nathi Mthethwa always at the forefront of condolences/ congratulations but never ahead of bettering artist’s lives or improving the arts field.”

Meanwhile, Connie Ferguson left everyone in tears as they listened to a voice recording dedicated to Shona. In the clip, Connie can be heard describing her and Shona’s one-of-a-kind love. She also spoke about how she had cared for him in his last days:

“How I saw you at the hospital, how you fought. I want you to know how I am so proud of you. Even on your hospital bed, you defied the odds so many times.

“I am hurting right now, my heart is bleeding, I wasn’t ready to let you go.”