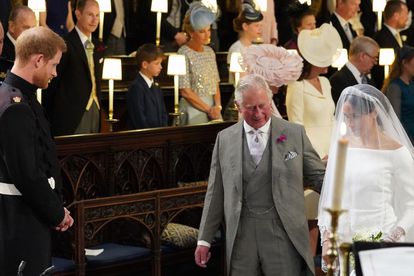 King Charles III extended an olive branch to his son Prince Harry and his wife Meghan Markle in his first address to the nation as King on Friday 9 September following “high tension”.

King Charles III addressed the nation for the first time as King on Friday 10 September. His Majesty confirmed that his eldest son Prince William is the heir to the throne.

King Charles III officially passed down his Prince of Wales title to his son Prince William. This makes Kate Middleton the first Princess of Wales since William’s mother Princess Diana.

In his address, the new King extended an olive branch to Prince Harry and his wife Meghan Markle.

“I want also to express my love for Harry and Meghan as they continue to build their lives overseas,” he said in a pre-recorded video message that aired on TV on Friday 9 September.

This comes after Meghan Markle’s bombshell interview with The Cut. The Duchess of Sussex claimed that Prince Harry “lost” his father after Megxit.

The couple’s decision to step back from their royal duties and move to the US is known as Megxit.

“Harry said to me, ‘I lost my dad in this process,” she said referring to Megxit.

Prince Harry claimed that his father “stopped taking his calls” regarding conversations about leaving his role as a working member of the royal family. This was in the couple’s bombshell interview with Oprah Winfrey in March 2021.

However, it seems King Charles III has had a change of heart.

ALSO READ: What is the difference between Queen and Queen Consort?