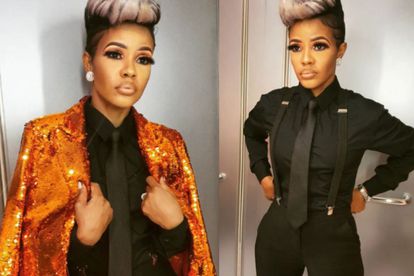 South African singer Kelly Khumalo’s sister Zandie Gumede spoke out about the death of former Bafana Bafana captain Senzo Meyiwa in a tell-all interview with eNCA on Monday 18 July. Zandie was among those present at her mom’s house in Vosloorus, where the soccer star was believed to have been killed in a botched robbery on 26 October 2014.

Here’s four bombshells from the interview.

1. ZANDIE SAID SHE SAT WITH SENZO AS HE WAS RUSHED TO THE HOSPITAL

The singer claimed that Senzo died in her arms while he was being rushed to hospital. She went on to say that she was putting pressure on the wound.

“I was the one sitting with Senzo at the back [of the car] putting pressure on the wound leading to the hospital. Even on our way to the hospital I could feel him getting cold from his feet … I was busy talking to him all the way, trying to keep him alive but unfortunately …” she said.

2. ZANDIE THINKS SENZO’S WIFE AND MOTHER NEED TO BE INVESTIGATED

The singer expressed that she thinks Senzo’s wife Mandisa Mkhize and his mother should have been investigated.

“We have done the lie detector test and everything but no one has looked at Mandisa. Why is she not being investigated?” she said.

“Not so long ago Senzo’s mother said on TV that she tried by all means to end their relationship. She even went as far as getting muthi,” she continued.

“Is it even possible that she and daughter-in-law sent a hit. Not necessarily to target Senzo, but to target Kelly,” she added.

Zandie claims she and her then-boyfriend Longwe Twala were interrogated for hours after Senzo’s murder. She said that they were also called in for additional statements.

“Longwe and myself were called. The police fetched us at Longwe’s grandmother’ house. We had no problem because we wanted to help… We were put in different room, interrogated. Our phones were taken. After that we were sent back home,” she said.

The singer also revealed that they were called in for a lie detector test in around 2017/2018.

4. POLICE ARE FISHING IN ONE POND

Zandie also expressed that she believed the police are “fishing in one pond.” So, she feels the search needs to be border.

“My other concern is that the police are only fishing in one pond. Why can’t we look at other avenues because its been eight years since this happened. But everyone is looking in the same direction with no answers,” she continued.