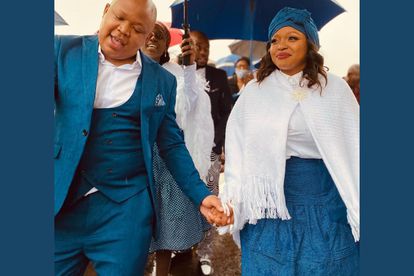 YoTV child star and media personality Karabo Ntshweng announced that she officially married via an Instagram post on 2 December.

Karabo Ntshweng and the love of her life David Molotlhanyi tied the knot last week. The pair got engaged in Cape Town in September.

“Pop the champagne ????I’m changing my last name,” she wrote on Instagram.

Karabo was a stunning “Makoti” as she posted a snap from her Tswana-themed wedding.

“Had my cows come home yesterday and it was absolutely amazing,” she wrote on an Instagram story.

The YoTV child star and her partner know each other for over 10 years and she said she can’t imagine spending her life with anyone else.

“We’ve been together for a very long time. I’ve known him since I was 19 so there was really no question about it. Everything happens in God’s time and I’m extremely excited. He’s my best friend and I don’t think anyone understands me as much as he does. He’s kind and so patient with me and I can’t imagine spending my life with anybody else,” she told Tshisa LIVE.

PHOTOS OF THE TRADITIONAL WEDDING

KARABO: ‘I WAS NOT EXPECTING THAT TO HAPPEN AT ALL’

Speaking of her engagement, Karabo said that she did not expect Molotlhanyi to propose on her birthday. She explained that she was caught off guard and it happened after they were wrapping up the weekend.

“We were having drinks outside wrapping up the weekend, and I remember turning around and that’s when the proposal happened. It caught me completely off guard and I was not expecting that to happen at all. We have been together for a very long time and at some point I knew that we would get married, I just didn’t think that he would propose on my birthday,” said Karabo to Drum.

The 5FM radio host went on to say that she thought the timing was ideal at 30 because she never wanted to be married in her 20s.

“A lot happened in my 20s, I had a a lot of fun in my 20s, and I don’t have any regrets about the things that I have done. I went to all the concerts I wanted to go to, I honoured invitations to things and being stuck in the house due to Covid-19 made me even more grateful for the fun times that I have had. I have been lucky to have started a career even before I was 20 and my career has been going well,” she continued.