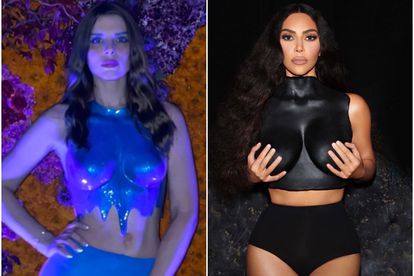 The new girlfriend of rapper Kanye West has often been compared to his estranged wife in the month that they’ve been dating.

Julia Fox drew backlash from Kim Kardashian fans after she was accused of imitating a look worn by the star last month.

The Uncut Gems actress wore a blue chest mould which she posted on her Instagram Stories. The look was strikingly similar to a look worn by Kim in a publicity pic from her KKW fragrance shoot.

But Julia Fox was not taking flack for her alleged fashion fumble.

It’s not the first time Julia has been accused of copying Kim Kardashian.

A number of her outfits have been compared to Kim’s in looks pulled out of the fashion archives.