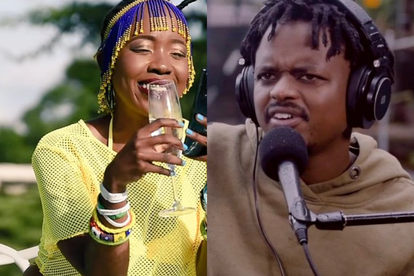 Despite the controversy and drama that seems to follow him, podcaster MacG appears to be really making a name for himself in the entertainment industry. The Podcast and Chill host is pulling big numbers and recently hit 500k subscribers on YouTube. This may be why poet and human rights activist Ntsiki Mazwai allegedly decided to ask for R70 000 to be a guest on the popular podcast.

MacG and the boys have been the talk of the town for the last few months now and it hasn’t always been all good. The podcaster received a ton of backlash after he did a very controversial sit-down with reality TV host Jub Jub.

This after Jub Jub mentioned his relationship with actress Amanda du Pont who subsequently accused him of raping her while they were together.

MacG once again trended only a short while later when he did an interview with US singer Ari Lennox. During the interview, MacG asked the Shea Butter singer who she was currently sexually involved with and she did not take it lightly.

One of the people who slammed MacG for the interview was Ntsiki Mazwai. She then shocked many when she turned on Ari who criticised South African men as a result of the interview.

Zalebs reveals that MacG later asked Ntsiki to join him on the podcast to discuss the Ari Lennox but was gobsmacked to hear that Ntsiki wanted a whopping R70 000 just to appear as a guest.

Speaking during a recent episode of Podcast and Chill, MacG laughed at Ntsiki’s bizarre request.

Ntsiki however did not seem bothered by the fact that MacG and his crew were laughing at her alleged R70k request.

She took to Twitter shortly after their discussion and advised the young men to stop trying to maintain their relevance by using her name:

“This thing is simple… If I don’t want to be accessible to you, I don’t want to… And I will create hoops for you to jump thru. Maybe you should read between the lines,” she said in one of her tweets.

She also warned her followers not to bother her with what “gossip mongers” have to say.

Over 20 people killed in various drowning incidents in Limpopo