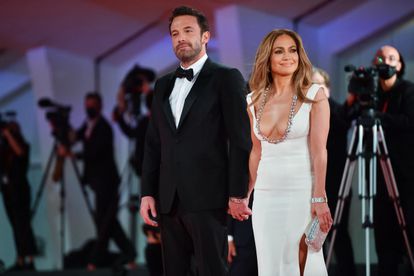 US actress and singer Jennifer Lopez and US actor Ben Affleck arrive for the screening of the film “The Last Duel” presented out of competition on September 10, 2021 during the 78th Venice Film Festival at Venice Lido. Image: Filippo Monteforte/AFP.

US actress and singer Jennifer Lopez and US actor Ben Affleck arrive for the screening of the film “The Last Duel” presented out of competition on September 10, 2021 during the 78th Venice Film Festival at Venice Lido. Image: Filippo Monteforte/AFP.

Jennifer Lopez and Ben Affleck made their red carpet return this past Friday night as they attended the premiere of Ben’s film, The Last Duel, at the 2021 Venice Film Festival.

The stars sizzled on the red carpet during the event – which marks their first official public appearance since rekindling their romance this year.

According to People, the couple – made their relationship status official on Instagram in July – originally began dating in July 2002 after meeting on the set of their movie Gigli. They got engaged that November before postponing their September 2003 wedding just days before the original date and ultimately called off their engagement in January 2004.

At the time they released a statement saying that due to “the excessive media attention surrounding our wedding, we have decided to postpone the date”. The couple came to the realisation that something had gone awry after they contemplated hiring three separate ‘decoy brides’ at three different locations.

Now, their relationship is going better than ever, according to various reports.

A stamp of approval

It is reported that Jennifer (52) also supported Ben (49) earlier on Friday when she accompanied him to the film’s photo-call. Ben co-wrote The Last Duel with his long-time best friend, Matt Damon. Jodie Comer and Adam Driver also star in the medieval soap opera directed by Ridley Scott.

Earlier this year, Matt gave his stamp of approval on his BFF’s rekindled relationship.

“You’re very happy for Ben Affleck and Jennifer Lopez,” Jess Cagle said in July on his SiriusXM show. “I know you love getting asked about that.”

“Right. But how else would I be? Like, would I be unhappy? Like, ‘I hate true love,'” Matt joked. “It sucks. Yeah. Yeah. I wish them nothing but, you know, hardship.”

Matt added in a separate interview with People, “No one’s pulling harder [for them] than I am… They’re both great”.