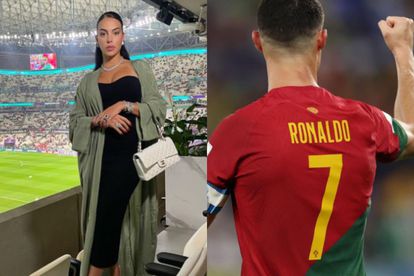 Georgina Rodriguez defends Cristiano Ronaldo after he was benched. Images via Instagram @georginagio and @cristiano.

Georgina Rodriguez defends Cristiano Ronaldo after he was benched. Images via Instagram @georginagio and @cristiano.

Model and Instagram influencer Georgina Rodriguez jumped in to defend her fiance, Portugal’s forward Cristiano Ronaldo after he was benched for the team’s match against Switzerland on Tuesday 6 December.

Portugal won 6-1 against Switzerland at the Fifa World Cup taking place in Qatar.

Portugal forward Cristiano Ronaldo was benched for the team’s match against Switzerland at the 2022 Fifa World Cup held in Qatar. Although, he did come out in the 73rd minute..

The Portuguese footballer was yet again the centre of a controversy after he made a “shh” gesture by putting his finger over his lips when being taken off in the team’s match against South Korea. Portugal lost against South Korea 2-1.

Portugal’s manager Fernando Santos said he was not impressed by this – according to Euro Sport.

“But from that moment onwards everything is finished regarding that issue. These matters are resolved behind closed doors. It’s resolved. Full stop on this matter and now everyone is focused on tomorrow’s match,” he continued.

Ronaldo has defended himself saying: “I told him to shut up, he has no authority, he doesn’t have to say anything”.

ALSO READ: Who is Ronaldo’s fiancée? Five things to know about Georgina

The mom of Ronaldo’s two daughters and late son – Georgina congratulated Portugal on their win. She also jumped in to defend her fiancé after he was benched, saying that the fans have not stopped screaming his name.

She also mentioned Santos in her caption. Take a look…

“Congratulations Portugal 🇵🇹♥️💚 While the 11 players sang the anthem all goals placed on you. What a shame he didn’t get to enjoy the best player in the world for the 90 minutes,” she wrote.

“The fans haven’t stopped claiming you and screaming your name. I hope God and your dear friend Fernando hold hands and make us vibrate one more night ⭐️,” she continued.

“Amazing day for Portugal, with a historic result in the biggest contest in world soccer. Luxury exhibition by a team full of talent and youth. Congratulations to our national team. The dream is alive! To the very end! Come on, Portugal,” read the caption.

ALSO READ: Ronaldo vs Messi: Who are the football star’s WAGS?