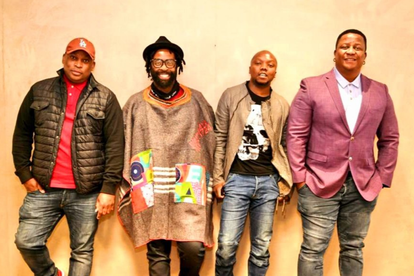 South African musician and businessman DJ Sbu has come with what many social media users are calling an amazing idea. The DJ took to Twitter on 3 August 2021 to share a post about starting a radio station for all the “legends” who were fired from radio such as himself, Gareth Cliff, DJ Fresh, Phat Joe, and most recently, Robert Marawa.

South African musician and founder of Mo’Fire energy drink, DJ Sbu, has headed online with a tweet that piqued many South Africans’ interest.

Taking to Twitter on Tuesday this week, the DJ posted about starting a radio station called FiredFM for all the “legends” who were fired from their respective radio shows.

He also called on his fans to share ideas of which female radio hosts can join the man gang. Among the musician’s list were the likes of Gareth Cliff, DJ Fresh, Phat Joe and Robert Marawa.

“Now that Robert has also joined the Fired Squad. How many of you would love to see this Radio Station happen and which sisters would you recommend to join these G.O.A.T.S on the line-up?” he wrote.

Robert Marawa seemed to love the idea and even posted a snap of the possible FiredFM radio hosts posing together with big smiles.

#FiredFM: South Africans get to talking

Many locals seemed to think that DJ Sbu’s FiredFM is the best idea since sliced bread and wasted no time taking to the comment section to share who they thought would make stellar additions to the “dream team”.

Even Hazel Mahazard, Prince Kaybee’s alleged mistress was in the comment section offering her services since she too was “cancelled” by Mzansi.

“Since I’m also a cancelled DJ amongst the power circles and club scenes, I’d like to have a shot at being a resident DJ who does live mixes on a breakfast or midday show every Friday.”

“I would like to add @JJTabane for news and politics show. @Linda_Sibiyafor some Zondo motivations. @euphonik on weekends and for ladies. @bonang_m on weekends also in the morning, please please try this guy’s we would support you.”

What happened to Robert Marawa?

On Friday 30 July 2021, the South African Broadcasting Corporation confirmed that Robert Marawa’s contract with them has come to an end. In a statement, SABC confirmed that he will no longer be on Metro FM and Radio 2000 where he hosted Marawa Sports Worldwide.

“The South African Broadcasting Corporation (SABC), would like to announce the departure of renowned sports broadcasters, Mr Robert Marawa and Ms Vaylen Kirtley. Robert Marawa departs following the conclusion of the MSW (Marawa Sports Worldwide) which Marawa presented on both Metro FM and Radio 2000 simultaneously.