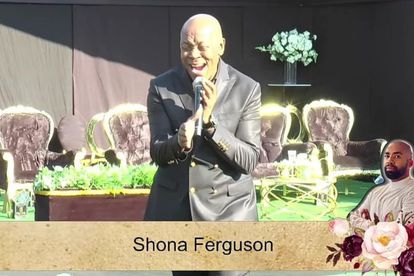 The funeral service of The Queen actor Shona Ferguson on Wednesday 4 August was live-streamed across various channels and watched by people across Africa which included Botswana where Ferguson was born.

The actor who was famously known as Uncle Sho, passed away last Friday 30 July due to COVID-19-related complications at the age of 47.

Shona was first admitted to Pine Haven Hospital when he was diagnosed with COVID-19 on 26 June, but was later airlifted to Milpark Hospital when his condition worsened. He passed away after spending two weeks in the hospital’s intensive care unit (ICU).

His daughter Alicia Ferguson pledged to continue on the legacy of her late father and make him proud at the funeral service at the Fourways Memorial Cemetery, north of Johannesburg.

My father motivated me to take bigger steps in life than I would have taken.

I am thankful that he enabled me to do that. In the past, I was a child who was very much in my shell and he opened that shell.

He made a promise that he will always be on my side no matter what comes. I also make a promise to you to carry on with the legacy and make you and the family proud.

Dad came into my life 20 years ago.

He impacted our lives in so many different ways. We always knew when dad was around because of his laughter.

Shona’s six-year-old grandson, Ronewa Malema — who is the son of Lesedi Matsuenyane-Ferguson and Austin Malema, said:

My grandpa was more than my grandpa because he already knew what I wanted before I even ask him.

Shona’s older brother Dominque Ferguson said he was still in a state of disbelief and told mourners that his brother was a happy child and a rebellious teenager.

He started to straighten out a lot when he met Connie.

He developed a strong love for music, especially hip-hop.

He loves entertaining people, telling stories. As he grew older he got his hustle on.

It hurts that I’ll never hear you call me Dom-Digity again.

I’m proud of the man you became in your short life.

Connie’s brother Antony Masilo said he met Shona long before he dated his sister and said he did not approve at first as they got married after only four months of dating. He says Shona became more than his brother-in-law and that he’s happy that their marriage became the personification of two people in love.

Connie’s pre-recorded message to her husband left Mzansi in tears. The heartbroken mother of two said she imagined another 20 years with her husband as she didn’t anticipate his death so soon.

I thought you and I were going to grow old together.

31 July was exactly 20 years together; I anticipated another 20 years.

Shona will be remembered for his passion for the entertainment industry and for creating shows such as Rockville, The Queen, The Gift, The Throne, The Herd, and The Imposter under his production company Ferguson Films which he co-owned with his actress wife, Connie.