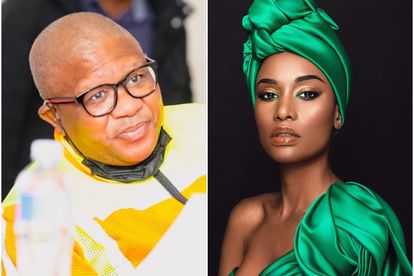 The Minister of Transport was raked over the coals after he reposted a picture of the beauty queen, whom he hinted at an affiliation with the ruling party.

Fikile Mbalula posted a picture of Zozi taken during her reign as Miss Universe between 2019 -2020.

“Nice colours  black green and gold,” he said of the hues that make up the colours of the ANC flag.

“No. She has no affiliation or connection to your party. Leave her out of politics,” said one tweep.

A second added: “You are tarnishing the image of former Miss Universe by associating her with the ANC.”

A third tweep warned Fiks – tagging Zozi herself – that he was crossing a legal line.

“@zozitunzi  did you consent to this? If not you can sue fikile anytime as per POPIA!”

And then there were those who poked fun at Fikile by posting a pic of the Miss South Africa Top 3; Lalela Mswane, Moretwa Masima and Zimi Mabunzi wearing red gowns, the official colour of the EFF.

Even Mmusi Maimane – who left the DA to start the One SA Movement party – weighed in, posting a picture of himself superimposed on a meme serving Bra Fiks an “L” (aka a loss)

But Mr Razmatazz laughed off the criticism, insisting his post was meant literally.

Meanwhile a video of a member of EFF mistakenly telling a crowd to “Vote ANC” has gone viral.

Fikile Mbalula posted a clip of the unnamed woman who had the timeline in stitches after she got her political parties mixed up.

“When you act like you’ve moved on, but you’re still in love with your ex,” read a caption from the clip posted by the minister.

And whilst Fiks thought his following would appreciate the humour, the joke was actually on him.

“This lady might be working for the Department of transport remember blood in the alcohol.  @MbalulaFikile,” responded one tweep.

Another responded by reposting the viral clip of President Cyril Ramaphosa struggling to put on his facemask.

“When you trying to cover up the face of corruption, but it’s refusing,” they tweeted.