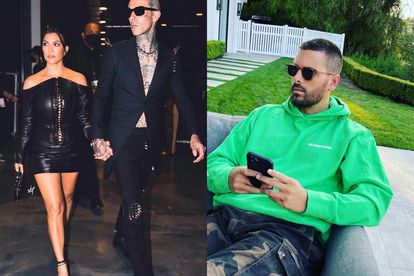 While they are not as concerned about Kourtney’s ex-boyfriend Scott Disick’s feelings.

After first becoming “Instagram official” in February this year, Travis Barker officially got down on one knee and asked Kourtney Kardashian to marry him. She literally said yes!

Travis had a gorgeous floral arrangement of thousands of roses in the shape of a heart set up on the beach of Rosewood Miramar hotel in Montecito California.

Travis shared a snap of Kourtney’s ring on his Instagram story.

According to inside sources Kourtney’s sister Khloe Kardashian and the father of her child Tristan Thompson were also there.

“Kourtney looked very surprised to see Khloe and Tristan there,” the insider shares. “Travis escorted Kourtney down to the beach, where he had red and white florals set up in the shape of a heart,” said a source to E News.

“It looked very romantic. I could see Kourtney smiling from ear to ear and put her hand over her mouth looking surprised. The family cheered for them and went back into the hotel,” the source continued.

Kourtney and Travis, who often go by the nickname “Kravis” have won the approval of Mzansi. Kourtney has been trending on Twitter since the news broke last night. Tweeps are loving the couple.

However, they weren’t empathetic towards the father of her child, Scott Disick. Kourtney and Scott had an on and off relationship for over 10 years. The pair share three children – Mason (11), Penelope (9) and Reign (6). In the final season of Keeping Up With The Kardashians Scott Disick tried exceptionally hard to win back the mother of his children.

However, Kourtney said that he had things to work out which he had not worked on. Therefore, she had not taken him back.Tweeps were not feeling any sympathy towards Scott and trolled him on Twitter.

“Scott must be dying,” read a tweet when roughly translated to English.

This would be Kourtney’s first marriage but Travis has been married twice before. He was married to Mellissa Kenedy from 2001 – 2002 and Shanna Moakler from 2004 – 2008. Travis and Shanna have two children together Alabama Luella Barker (15) and Landon Asher Barker (18).

ALSO READ: ‘Anything is possible’: Travis Barker thanks Kourtney for helping him overcome fear of flying