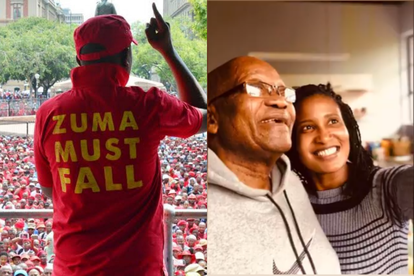 Not a day goes by without former president Jacob Zuma’s daughter Duduzile “Dudu” Zuma tweeting something interesting and more often than not, eyebrow-raising on Twitter.

On Sunday morning, the young lady headed to Twitter where she shared a short and admittedly awkward video of herself wishing the EFF a happy birthday.

Duduzile Zuma has left many people feeling confused about her loyalty after she took to her Twitter page on Sunday to wish the EFF a happy 8th birthday. In a short clip, dressed in all black, the daughter of ex-president Jacob Zuma can be seen sharing a few words with the Economic Fridays who are celebrating 8 years of politics this July.

” Happy 8th revolutionary birthday EFF, we may wear different colours but we are not enemies,” she can be heard saying.

She also thanks the EFF for “doing what many thought would not succeed.” She then praises them for their “commitment to black people” and for fighting to get the land back for black people.

LOCALS HAVE MIXED REACTIONS TO HER LITTLE SPEECH

While Happy 8th has been trending since yesterday, not many people are excited for the EFF. This must be why they parked themselves in Dudu’s comment section where they shared several thoughts about how stiff and awkward she looked.

Many also mentioned of Julius Malema of the EFF resulted in her father being removed as president. Read a few of their interesting comments below:

“I’m dead! D-e-d! It was painful to watch. And the tongue twisters, thiza bawo!”

“After 8 years they removed your father as president!! and told him to bring back the money…called him names and sorts of things! Ungumngqundu vhaa!!”

@DZumaSambudla. Kahleni boh, thina we are stressed, asidli, asikwazi ukulala because president Zuma is in jail, uBaba wakho. Wena you have time to memorise silly scripts and twerk for EFF.

“RET brigade and EFF are suddenly besties? Colour me shocked!!”