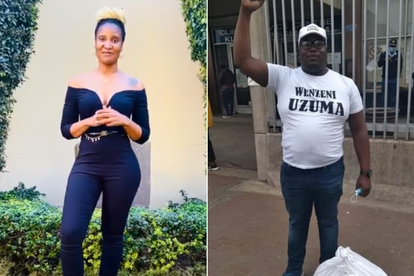 Duduzile Zuma who is known as “Dudu”, the daughter of convicted former president Jacob Zuma has defended a man who was caught trying to transport a big bulk of Jacob Zuma protest shirts from Johannesburg to KwaZulu-Natal for Zuma supporters who were meant to gather outside the courtyard for Zuma’s court hearing in KwaZulu-Natal.

Sizwe Nyambi, a big Jacob Zuma supporter and politician was allegedly arrested earlier today for attempting to transport Zuma support shirts from Johannesburg to KwaZulu-Natal. The shirts which read “Wenzeni uZuma?”, were meant to be taking to KZN for protesters who were planning to park outside the courtyard where Jacob Zuma was meant to appear.

While the peaceful protest was called off on account of Zuma being a no-show at the court, Dudu Zuma felt the need to defend the man who was trying to help protesters get properly clothed for the action.

Taking to her Twitter page, Dudu acknowledged the man and his efforts to support the country’s former president. In her tweet, she also shades those who are supposedly opposing her father’s release from prison.

“We See You Cde Sizwe Nyambi!!! THEY Are No Longer Hiding…Ayikhale,” she wrote.

Nyambi was later released and seemingly in high spirits:

Of course, the controversial post resulted in a number of people flocking to the comment section where they started to debate about Dudu and her endless mission to rally support for her father and his problematic politics. While Zuma fans joined her in defending Nyambi, others rejoiced over his capture.

“Besides seeing him, are you providing legal assistance to have him bailed out and represented?”

“The Zuma twins are inciting an insurrection through social media, from the safety of their mansions…. and they expect poor people to be in the streets on their behalf.”

“Cyril’s paid people to hate Zuma and his followers for no reason. They can’t complain Ben be objective let alone truthful.”

Meanwhile, Briefly News reported that those who were planning a peaceful protest outside Pietermaritzburg court have called off the protests as Zuma will no longer be appearing as he is currently still in the hospital.

ALSO READ: Jacob Zuma Foundation: No word yet on JZ’s condition in hospital