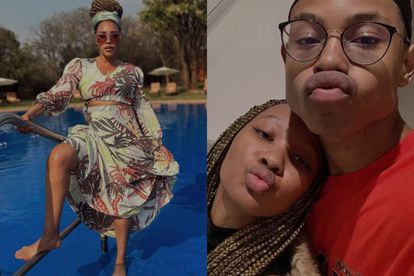 Actress Sonia Mbele has revealed she immediately took her son to rehab when she found out about the abuse earlier this month. Image via @thee_sonia, @donell_mbele/Instagram

Actress Sonia Mbele has revealed she immediately took her son to rehab when she found out about the abuse earlier this month. Image via @thee_sonia, @donell_mbele/Instagram

On Wednesday 23 November, a day after Reokeditswe went public about the abuse, Sonia Mbele released a statement condemning her son’s actions.

The former Generations actress has also spoken to Drum, revealing that her son is already in rehab.

In her press statement on Wednesday, the mom-of-four highlighted that Donell will account for his actions and face his demons.

The actress said that she will allow the law to take its course in this matter, also making mention of rehab

“With that said Donell will face his demons and take accountability for his actions and let the law take its course. I refuse to raise a man like his father. Rehab, therapy and internal healing will prevail,” Sonia Mbele wrote in part.

DONELL MBELE IS IN REHAB

According to her interview with Drum, Donell is already in rehab.

Sonia revealed that the abuse took place on 4 November, which is contrary to Reokeditswe ‘s posts on Tuesday 22 November in which she said Donell had abused her again that day

“This did not happen on Tuesday, it happened on 4 November, and I immediately sent my son to rehab the following day. So, by the time this became public, he was already away.”

In a conversation shared by the 21-year-old, along with pictures of her bruised face, Donell admitted to “almost killing and raping” his ex.

‘I DID NOT MENTION ANY NAMES’

When Sonia Mbele released her statement, she expressed that she refuses to “raise a man like his father”. This prompted tweeps to assume that she was referring to her ex-husband Lesley Sedibe.

“I did not mention names, I did not speak about my ex-husband. I would never do that to Lesley.

“I met Lesley when I was 28 years old. What I am not going to do though, is sit down with people and go through the maths,” she clarified.