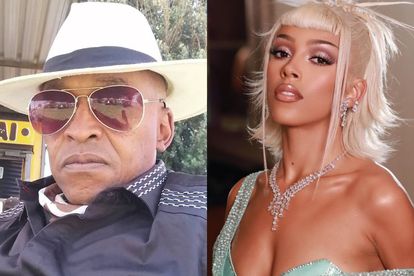 Mzansi Instagrammers trolled actor Dumisani Dlamini so much that he deleted his post about his estranged daughter, Amala Ratna Zandile Dlamini, popularly known as Doja Cat’s, Grammy win – on 4 April.

Mzansi dragged Dumisani Dlamini on Instagram after he shared a “thank you” post for his estranged daughter Doja Cat’s Grammy win. Doja Cat collected her Grammy for her chart-topping single Kiss Me More featuring SZA after a quick bathroom break.

“I have never taken such a fast p*** in my whole life. I like to downplay a lot of sh*t. But this is a big deal. Thank you everybody. Be safe, take care,” she said.

Dumisani took to Instagram to thank everyone who supported his “child” but he was dragged for being a “deadbeat” dad. He eventually deleted the post from Instagram.

“Just wanted to thank everyone who supported my child zandile god bless you all,” he captioned the since-deleted post.

The Sarafina star also previously shared a post thanking everyone for supporting his “African princess” daughter.

“African princess thank so much for supporting god bless you more,” he wrote.

ALSO READ: ‘I’ve tried to search for my baby’: 5 things to know about Doja Cat’s father

DOJA CAT: ‘I NEVER MET HIM’

Doja Cat opened up about her estranged relationship with her father in an interview on Radio One D.C in 2019. She said that she has never met her father but he comments on her pictures on Instagram. The Kiss Me More star added that she does not know him very well.

“I have never [met him], and he’s on Instagram. And he comments on my pictures sometimes, maybe not anymore, but he did a few months ago. He’s an incredible dancer and great actor, but yeah, I don’t know him very well,” she said in an interview with Radio One DC.