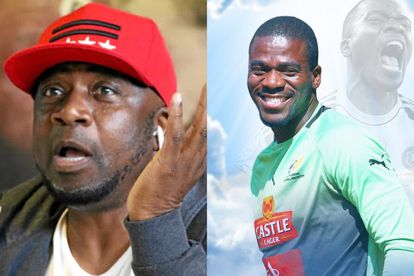 Chicco Twala’s revelation that he visited Senzo Meyiwa’s family has tweeos convinced that he was there to bribe them. Images via Twitter @LMakhetloane, @LebohangBokako

Chicco Twala’s revelation that he visited Senzo Meyiwa’s family has tweeos convinced that he was there to bribe them. Images via Twitter @LMakhetloane, @LebohangBokako

Social media users have been up in arms after musician and producer Sello Chicco Twala’s revelation on Tuesday, 15 November, at the Pretoria High Court that he visited the family of slain Bafana Bafana goalkeeper Senzo Meyiwa.

However, according to tweeps, the reason for his visit was to bribe or “pay off” the family.

According to the music producer he spoke to Senzo Meyiwa’s mother when he visited the family on Saturday.

“I have been in contact with Senzo’s mom for a long time. It is not a new thing. It is not the first time that me and her communicated. We communicate with her and there is nothing wrong with that. We are not talking about the case that is going on.

“I was there to give her support and tell her that justice will be served. I told her she must not worry too much. The passing of Senzo affected her a lot because he was a breadwinner. I told her that people like myself and all South Africans will support her and it is not like she is on her own now that Senzo is not around,” SowetanLIVE quoted Chicco Twala as saying.

Senzo Meyiwa’s family member Nomalanga also confirmed that Chicco Twala visited their family, but she did not want to divulge the contents of the discussion.

The late Orlando Pirates player was murdered on 26 October 2014 at the home of his then-girlfriend Kelly Khumalo in Vosloorus, Gauteng.

One of the people present at the house was Longwe Twala — the son of Chicco Twala.

ALSO READ: ‘He had beef with Senzo’: Tweeps on claim Longwe ‘pulled trigger’

According to defence counsel for accused number one to four, Timothy Thobane, Madlala’s statement alleged that Longwe was the one who shot and killed Meyiwa.

POLICE HAVE BEEN LOOKING FOR LONGWE

According to another journalist Motso Modise, Chicco Twala said that the police have been looking for his son.

“Chicco says Longwe is now out of rehab and is getting ready to take the witness stand.”

Twitter users who have weighed on Chicco’s visit to the Meyiwa family believe his visit was very questionable.

“Lol why now? He was never close to Senzo’s family, why all of a sudden he wants to support them?” asked one tweep.

Meanwhile, another tweep suggested that he visited the family “to buy them off”.