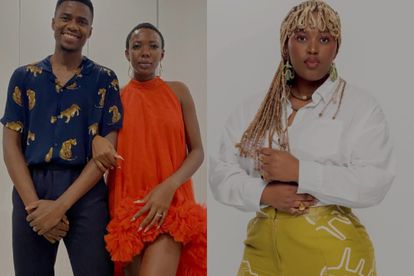 Msaki has been receiving a lot of love on social media amid claims she cheated with Smash Afrika. Images via @kayfeelow, @msaki_za/Instagram

Msaki has been receiving a lot of love on social media amid claims she cheated with Smash Afrika. Images via @kayfeelow, @msaki_za/Instagram

Eastern Cape-born musician Msaki, real name Asanda Mvana, has been receiving a lot of love following allegations she and media personality Smash Afrika have been having an affair.

Smash Afrika, real name Afrika Mdutyulwa, is accused of emotionally and psychologically abusing his wife — who is the daughter of well-known actress Rami Chuene.

The source revealed that the situation between the couple became so dire that Kefiloe left their matrimonial home, also referencing a violent incident in which she broke drinking glasses, Smash Afrika’s sister’s car and his bedroom window when he would not let her get her stuff.

The couple got married in a traditional wedding in 2020 and have one child together.

The Massive Music presenter is also accused of cheating on his wife with Msaki. Msaki is married with three children.

Kefiloe has found puctures if the alleged couple and a letter from the Ubomi Abumanga hitmaker in which she allegedly confesses her undying love for the presenter.

“Kefiloe told us that Msaki denied dating Smash Afrika and said she misunderstood their relationship because there was nothing going on between them.”

Smash Afrika, on the other hand, is said to have admitted to the affair.

“He told her, unlike her, Msaki makes him happy and gives him peace,” said the source.

Both Msaki and Smash Afrika have not yet addressed the allegations. Kefiloe has said that a protection order is prohibiting her from speaking to the media

Following news of the cheating scandal, tweeps weighed in saying that they take the singer’s side.