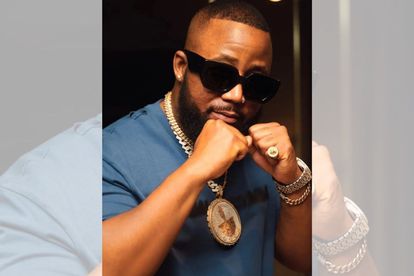 The rapper is due to fight fellow industry rapper Naakmusiq in a boxing match on 9 April at Sun City’s Superbowl.

The Billiato boss is taking the competition serious by regularly posting clips from his training sessions on his social media accounts.

But fans are warning him not to give too much away ahead of the match.

After posting another video of his boxing workout sessions, Cassper Nyovest was advised to refrain doing it in the future.

Ghanaian actor and comedian DKB warned Cassper to keep his cards close to his chest. He wrote in the comments section: “How about you hide your trainings so your opponent can’t predict the tricks you are perfecting?”

Cassper acknowledged the comment, responding: “Even if he came to watch me in the gym everyday he still wouldn’t be able to do anything. He’s a bum! I’m 10 times the champion! He can’t beat me!”.

Other followers agreed with DKB

“This ain’t a street fight! Keep it discreet Cassper… being discreet would work the magic harder”

“Now you’re showing him your strategy”

“Train without showing anyone, let them see the game on match night”

“Training and strategy are two different things. The training helps him get his fitness and conditioning up, it’s not something his opponent can use to get his strategy”

“Posting your training or your tricks as you call it has nothing to do with what’s going to happen on the day .. all it takes is for @casspernyovest to remain focused time he’s counter attack and monitor he’s opponent’s body language and then the rest will be history”