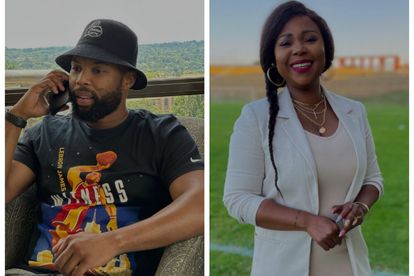 Sizwe Dhlomo is being labelled a bully after his complaint about Mpho Maboi (R) contributed in getting the Kaya 959 station manager fired. Images via @sizwedhlomo, @mphomqboi/Instagram

Sizwe Dhlomo is being labelled a bully after his complaint about Mpho Maboi (R) contributed in getting the Kaya 959 station manager fired. Images via @sizwedhlomo, @mphomqboi/Instagram

Social media users are biting businessman and presenter Sizwe Dhlomo’s head off following news his station manager Sibongile Mtyali was fired at Kaya 959 because of him.

Even after setting the record straight in a string of tweets on Sunday 27 November, the Kaya drive host was dragged by tweeps and labelled a “bully and toxic co-worker”.

Mtyali, who defended Maboi for arriving an hour before the show — as per her contract — was fired on Friday 25 November.

It is reported that some staff members also accused her of favouritism and being a bully.

“Since Sizwe did not get what he wanted, numerous people have anonymously lodged complaints to the board about Mtyali, citing that she is never available to staffers and she does not resolve complaints, basically saying that she is a bad manager. The allegations were investigated and proven to be untrue, but they terminated her contract anyway,” said the source.

Another source added that the matter could end up in court as the board refused to pay her for the remaining 19 years of the 20-year contract she signed with the station in 2021.

Sunday World reported that Sibongile Mtyali will likely be replaced by veteran broadcaster Thabo “Tbose” Mokwele, who hosts the 09:00 to 12:00 weekly slot titled The Best T In The City on Kaya 959.

When Sizwe Dhlomo took to Twitter to correct a few points in the story narrated by the various sources to City Press, his side of the story was dismssed by tweeps.

Tweeps are labelling Dhlomo a bully and toxic co-worker, among other names, especially after he was at the centre of former Idols SA judge Unathi’s sacking earlier this year.

According to Dhlomo, their prep starts at 13:00, two hours before their show at 15:00 and those who cannot be at the station can join meetings virtually, however Maboi allegedly failed to do so.

“It meant she didn’t know what was being discussed, it meant she would sometimes not have a sports trivia prepped on air & that was jeopardising the quality of the show…So I spoke to her twice (on record) & when she continued, I went to her manager for him to address it,” he explained

When he spoke to her about it twice, she skipped her manager and reported him to Mtyali. He added that HR told him to accommodate Maboi and stop interfering in the music department as he chooses music for his own show.