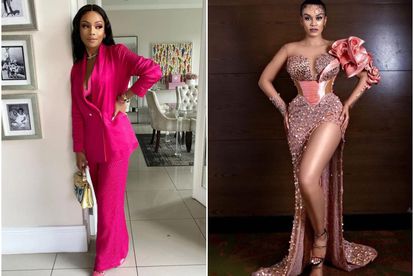 It’s no secret that Pearl Thusi and Bonang are not friends. But as successful as the two are – in their own lanes of course – they’re always being pitted up against each other.

This week, Pearl celebrated the release of her action movie Fistful of Vengeance, which became the number one trending movie on Netflix worldwide. She also received her flowers from a number of celebs, including US actress Queen Latifah.

However Pearl’s accomplishments quickly became a topic of competition against her industry rival Bonang.

A number of tweeps – including notorious Twitter troll Chris Excel –  lambasted the BNG star for her own recent career accomplishment.

“Bonang has become irrelevant,” said one tweep. “I couldn’t agree more”, said another.

One tweep even brought up the pair’s old beef.

“Bonang thought she was big. I remember what she did to Pearl Thusi when she was asked to take a pic of Pearl with Pharrell Williams. LoGogo owuBonang took a pic of a wall. Zyakhala keh manje [She’s crying now]”, posted the tweep.

‘STOP THE COMPARISONS’, BEG OTHERS

“When Minnie got married some of you went crazy asking Bonang when she is getting married. Pearl is getting international recognition and you are bringing up Bonang’s name.The industry is big enough for all these black queens”

“The nasty tweets about Bonang are not about celebrating Pearl. They are using Pearl’s moment to come for someone they don’t like, desperate acts of evil. Genuinely celebrate Pearl and leave others out of it”

“The moment  you hype or congratulate  Pearl Thusi with comparison  either to Bonang or anyone, you’re ruining the whole thing. I doubt  even @PearlThusi  will appreciate  that”