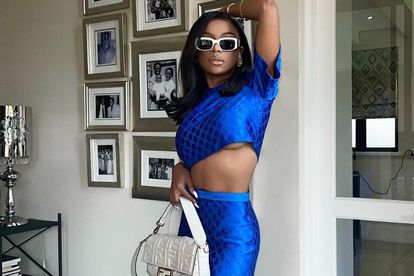 Bonang Matheba has teased her fans once again with claims she has a boyfriend.

The secretive star has dropped another hint about the man in her life, whom she refuses to name.

But instead of giving more details, tweeps are more confused than ever!

WHO IS THE MAN IN BONANG MATHEBA’S LIFE?

Last week Bonang tweeted that she had met Mr Right after years of dating Mr Wrong.

She posted: “I’ve met the love of my life, I just wish he was ONE person”.

“Which means you met physical attraction plus mental attraction but not in one body ne Queen?”, asked one tweep.

“Is he Big and Zulu?”, said another, referring to rumours that Bonang and Big Zulu are more than just flirty friends.

Others couldn’t comprehend her statement, but wished her well nevertheless

Bonang – who has dated AKA, Euphonik, Slikour, D’Banj and Simphiwe Tshabalala – has kept her pretty pout sealed about who her mystery man.

In 2019, the media personality was linked to Albanian businessman Fatmir Hysenbelliu after she posted a series of snaps of him on her IG Stories.

But things went quiet for a while, leading many to believe she had called it quits with “Mr Albania”.

Last year she fueled rumours she was dating again. “I love this boy. Finna give him some babies,” she tweeted in October.

When one fan asked her to reveal the identity of her partner, she replied: “Last time I shared, ya’ll spammed his IG! Then! Pain.”

AKA AND NADIA ARE LOVED-UP

Meanwhile Bonang’s ex AKA has been flaunting his new relationship with fellow rapper Nadia Nakai.

The loved-up couple have been making public appearances together, showing off plenty of PDA.

AKA – who went Instagram Official with Nadia earlier this month – has even crushed on his girlfriend on his IG Stories.