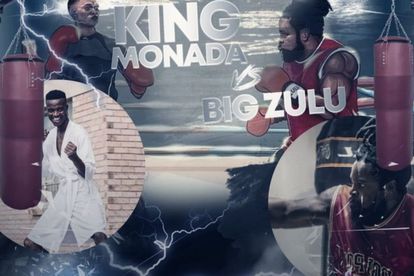 It’s a fight that’s been a long time coming, and finally King Monada and Big Zulu are ready to face off in the boxing ring.

The singer and rapper have had a back and forth for months over their proposed celebrity boxing match.

And now it’s officially set in stone – come March 2022 the pair will go head to head.

Big Zulu shared the news of the match on his Twitter page. He tweeted in isiZulu: “This person is irritating me. Here is the date for the match. Let me crush him”.

Details of the exact date and venue have yet to be announced.

Big Zulu and King Monada have a long-standing rivalry between them.

In May, King Monada challenged Big Zulu to meet him in the ring. The rapper declined though, asking if there was “anyone else” he could fight.

The two seemingly came face to face in a “teaser” fight in June when King Monado posted a video of himself climbing into the ring opposite Big Zulu.

The clip ended with the words “Date to be announced soon”

Meanwhile Siv Ngesi, who has also challenged Big Zulu to a fight has thrown shade at his nemesis.

The TV personality retaliated after Big Zulu claimed he “did not fight women”. The latter was referring to Siv Ngesi’s drag queen personality Sivanna.

But Siv is having the last laugh.

He tweeted: “Dear Chicken Zulu ( @BigZulu_ZN) I respect your ‘I’m too scared to fight you’  tweet….  Chief there’s no use in you even jumping in the ring against me , you’ve already lost!  Hopefully Father Christmas gives you balls this Christmas”.