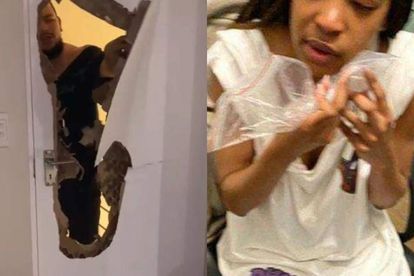 AKA breaks down door to get to Nelli Tembe. Images via Twitter @_ShaunKeyz

AKA breaks down door to get to Nelli Tembe. Images via Twitter @_ShaunKeyz

South African rapper Kiernan Jarryd Forbes, popularly known as AKA opened up about his late fiancée Anele “Nelli” Tembe on an episode of the Sobering podcast on 14 September.

AKA: ‘OUR RELATIONSHIP WAS SO EXPLOSIVE’

Rapper AKA appeared on the Sobering podcast where he spoke about the passing of his fiancée Anele “Nelli” Tembe. Nelli plunged to her death from the tenth floor of the Pepperclub Hotel in Cape Town on 11 April 2021.

Following her death, a video of AKA breaking down a door to get to Nelli went viral on Twitter. This sparked rumours of abuse. The Fela in Versace hitmaker has now responded to the video on an episode of the Sobering podcast. He said that it may now have looked good, but he did not abuse Nelli.

“That is one of those moments where you lose your temper and you break s*** in the crib. I didn’t abuse Anele, I might have been emotionally abusive at times,” he said.

“All you guys are seeing is a broken door and it doesn’t look good on me at all. I will take that and it’s not my finest moment. Our relationship was so explosive. It can be super great and also toxic. Sometimes you do things that you are not proud of,” he continued.

AKA ON ‘AMAZING’ NADIA

The rapper went on to say that there was an aftermath of Nelli’s tragic death.

“I understand because the aftermath of it is a tragedy. There’s also camps, there’s media, there’s her side, there is family, there is police.I think when she took her own life she also kinda took a part of my life with her. But it’s fine that was my choice, I must live with that. I wanted to make this woman my life, I have to live with that. Whatever happened, happened,” he said.

He went on to say that he still wants justice for her family and his.

“I don’t know why it has taken so long. Where is my justice? because in the meantime my life is lingering and where is the court of justice?” he continued.

AKA went on to say that God is graceful because he has an amazing woman in his life. The rapper was most likely referring to his girlfriend Nadia Nakai.

“But God is graceful because now I’ve got an amazing woman in my life as well – who picked me up, helped rebuild me, he said.