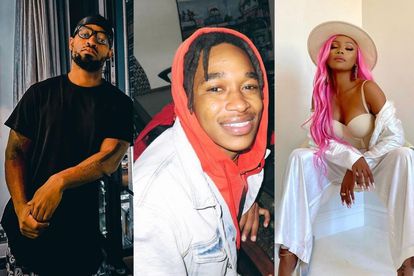 Media personality and businesswoman Bonang Matheba filed a defamation suit against YouTuber Rea Gopane on 16 May. This followed drug allegation remarks he and his partner Blvck Steph made on 9 May on their entertainment vlog Everything SA Music TV.

Since then there has also been talk of Prince Kaybee also suing the same YouTuber for remarks about the DJ’s “cheating scandal”. Kaybee, however, dismissed these claims, saying Rea couldn’t “afford it”.

The YouTuber’s real name is Reatlegile Gopane and he is a 22-year-old podcaster and co-founder of Everything SA Music TV which kicked off two months ago.

The YouTuber has quickly grabbed the attention of entertainment industry giants, but for all the wrong reasons it seems…

The former Being Bonang star clapped back with a R500 000 lawsuit against the YouTuber after he claimed that radio personality and actor Scoop Makhatini told him that Bonang introduced her ex-boyfriend rapper AKA to cocaine.

This follows the abuse claims made against AKA after a video of him breaking down a door to get to his late fiancee Nelli Tembe went viral.

“Scoop told us that AKA is on [cocaine] and Bonang is the one that got him into cocaine,” Rea said in the video circulated widely on social media. He was referring to the confidential conversation they had with Scoop.

Rea’s co-host warned him not to speak about things he has no evidence of, but the podcaster continued.

Bonang did not take these accusations lying down as she demanded an apology be made. Rea Gopane apologised and Bonang felt it was not enough.

He then issued an apology in video form apologising to Bonang, AKA and Siyabonga Ngwekazi.

“I would like to express my sincere apology for everything I said on our podcast dated (9 May 2021). I would like to unequivocally retract my statements and apologize to all the parties concerned namely Ms Bonang Matheba, Mr Kiernan Forbes and Mr Siyabonga Ngwekazi. I know and understand that the podcast could cause harm, and I am deeply regretful for my mistake,” wrote Gopane on Instagram.

The young YouTuber seems to already be going down the same path as controversial podcaster Mac G. On 12 May, Rea Gopane called Prince Kaybee “nasty” on his podcast in relation to his cheating scandal and his nudes being leaked by Hazel Mahazard. This resulted in Prince Kaybee admitting to cheating on his girlfriend Zola Zeelovin for five years.

Prince Kaybee clapped back quickly and said that the YouTuber could not afford being sued by him as well.

“Why would I sue, let him speak his mind, he wouldn’t afford it. Goodluck with your career @reagopane,” wrote Prince Kaybee on Twitter.

When a Tweep commented that the bold YouTuber is “trying to catch hands” Kaybee responded:

“I would break his jawline and send him to sleep, but what good is that gnna do. Let him enjoy swearing at me and running his mouth, all love this side.”