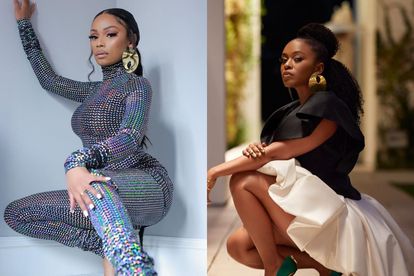 Television personality and businesswoman Bonang Matheba recently made a big move to the Big Apple, and made an appearance at the Global Citizen Live festival in Central Park.

She has worked with Global Citizen on various projects before and said the collaborations have given her great opportunities to continue her philanthropic work through the Bonang Matheba Foundation.

“We will continue to fight for the eradication of extreme poverty, vaccine equity and climate change,” said Nomzamo.

Bonang and Nomzamo showed up and showed out for their Global Citizen Live appearances. Bonang stepped out in a lime green piece by American fashion designer LaQuan Smith who received high praise at New York Fashion Week earlier this month.

Nomzamo also opted for a bright spring look and went with black leather pants and draped corset with a cape jacket. She went local and stepped out in a Willet Designs Couture piece.

Sho Madjozi held it down in Johannesburg and opened her performance with Amajoy from her award-winning album What A Life. The bright and bold songstress’ performance was filled with Xibelani dancing and joy all round.