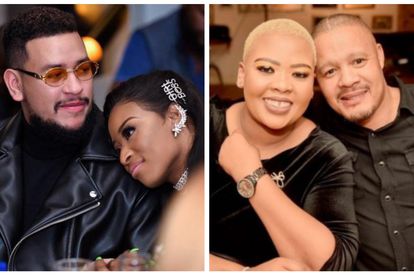 Anele Mdoda has compared DJ Zinhle and AKA’s relationship to that of hers and her ex, Alakhe’s dad.
Image via Instagram
@djzinhle/@zintathu

Anele Mdoda has compared DJ Zinhle and AKA’s relationship to that of hers and her ex, Alakhe’s dad.
Image via Instagram
@djzinhle/@zintathu

The rapper and DJ  sparked speculation that they were more than just co-parents by Twitter users.

AKA and Zinhle have both moved on from their relationship split in 2019 – AKA is now dating Nadia Nakai, whilst Zinhle is with Bongani “Murdah Bongz” Mohosana, whom she shares baby Asante with.

AKA AND ZINHLE SPARK SPECULATION

In a clip that went viral last week, DJ Zinhle and AKA are seen dancing with a group of children, including Kairo. The celebrity parents were celebrating their daughter’s seventh birthday party.

Kairo’s official Instagram account posted the video, with the caption: I’m the luckiest girl in the world because I’m part of a group of people, who genuinely love, trust, care about and look out for each other. We can be a little bit crazy and a little bit loud but we have a whole lot of love for each other. Thank you for my family”.

“DJ Zinhle with one of her many baby daddy’s at Kairo’s 7th birthday celebration”, he tweeted.

Twitter was filled with speculation that Zinhle is reportedly “still in love” with AKA – a claim they have both shut down.

Zinhle clapped back at criticism, tweeting about her relationship with her ex: “It’s gonna take time to unlearn old habits, change is uncomfortable but necessary. I can only be accountable to my kids, not Twitter”.

Taking to Twitter, Anele defended the AKA and Zinhle and their co-parenting relationship from critics. Anele co-parents with her own son Alakhe’s dad, which she claims is

She shared in a series of tweets:

“Guess what, this is exactly how you raise a child in an environment they don’t have to heal from. ALAKHE’S dad and I don’t even have weird things like days and reporting before you fetch your child. You want to see your kid… do exactly that. Y’all are dark. Dark dark”

“And this is why you are such weak stepparents because you see kids as something to be managed like a job and not people to be loved. Love does not keep office hours and an image. For you, how you treat kids depends on how you feel about their parents”

“Can we make sure we don’t send any more kids into the world who either wish their parent had made it easier for the other parent to parent or another child who cannot see an ounce of what was good of their parents together. Kids must know they were the best part of a passed union”.