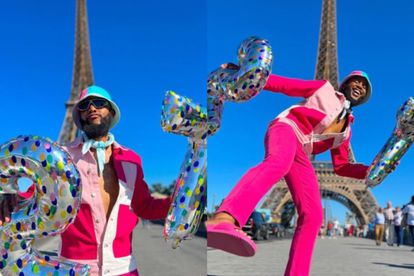 Radio personality and actor Mohale Motaung, who is the estranged husband of media personality Somizi Mhlongo celebrated his 27th birthday on 9 July with a trip to Paris.

Mohale Motaung celebrated his 27th birthday in the city of love, Paris. He is significantly younger than his 49-year-old estranged husband Somizi Mhlongo.

Somizi proposed to Mohale in the city of love – Paris back in March 2018. Shortly after the abuse allegations the pair announced that they were getting divorced. Somizi previously asked DJ Zinhle to bring back his “lock of love” that he “locked” with Mohale, while she was on a trip to Paris.

One of the main attraction’s for lovers in Paris is the lock bridge in Seine River. The bridge is located on the westernmost point of the Île de la Cité. This is where couples buy a padlock, inscribe their names on it, lock it on the bridge and throw away the key. The tradition symbolises love locked forever. Mohale joked about bringing back that lock in an Instagram post.

“I’m here to fetch that thing,” he wrote when roughly translated to English along with a lock emojii.

He also visited the Eiffel Tower and other attractions in the city. Take a look…

The actor then jetted off to Amsterdam in the Netherlands.

WHAT’S THE STATE OF ‘SOMHALE’?

Following the abuse allegations which were leaked in form of audio clips by Sunday World, Somizi addressed his divorce on the fifth season of his reality show – Living the Dream With Somizi. The media personality claimed Mohale wanted 50% of his estate and he dragged him many times calling him a money heist and making other revelations about their marriage.

Mohale chose to clap back by telling his side of the story in a tell-all Showmax special which is set to be released on 4 August.

“A lot has been said about me, both true and untrue. I initially had no intentions to publicly speak of the events that have occurred, due to an agreement I had with the other parties involved,” he said.

“But when the agreement was dishonoured by the other party, it became paramount that I tell my truth as I know it. With all the misinformation in the public domain, it is my responsibility to correct any propaganda as I represent not only myself, but those that may have experienced a story similar to mine,” he continued.