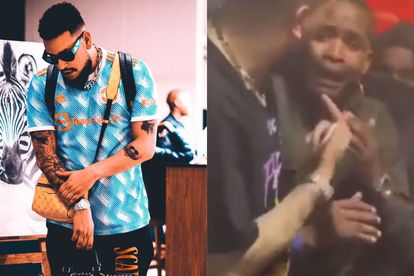 ‘That sh*t is cringe,’ said AKA after a fan was starstruck upon meeting him. Images via Twitter @akaworldwide @MusaKhawula

‘That sh*t is cringe,’ said AKA after a fan was starstruck upon meeting him. Images via Twitter @akaworldwide @MusaKhawula

Award-winning rapper AKA is one of the biggest hip-hop stars in the country, so naturally, fans would be excited to meet him. In a video that founds its way to Twitter on Monday 30 May, a fan was visibly starstruck upon meeting the Fela in Versace hitmaker but AKA made it clear that he’s not so fond of these reactions…

FAN IS STARSTRUCK BY AKA

Taking to Twitter on 30 May, controversial entertainment blogger Musa Khawula posted a video of a fan who has starstruck after meeting AKA.

In the video, the fan hugged AKA and cried hysterically after meeting the star rapper.

“A fan’s reaction upon meeting AKA,” wrote Khawula in his caption.

AKA SAYS THE FAN IS ‘BIT OVER THE POP’

In a series of tweets posted on Thursday 2 June, AKA said “falling to your knees and crying your eyes out as a grown man” when meeting him is “a bit over the top”.

“Pull yourself together man,” added the rapper.

“There’s nothing wrong with shedding a young tear or being emotional. But then there’s literally throwing yourself on the ground like I’m Jesus or something. That sh*t is cringe as f*ck.”

“Many famous people have been killed at the hands of their ‘biggest fans,’” tweeted the rapper.

Reacting to AKA’s tweets, a few local tweeps were not too pleased with what the star rapper had to say.

“You can’t dictate how people should react when they meet you. Honestly, fave, it’s bad enough that the guy was trolled all week long, I can’t begin to imagine how he must be feeling now,” wrote one tweep.

“Weren’t you the one preaching love and mental health awareness, men being vulnerable etc just a few months ago?” wrote another tweep.

“Says the guy with a Michael Jackson tattoo?”