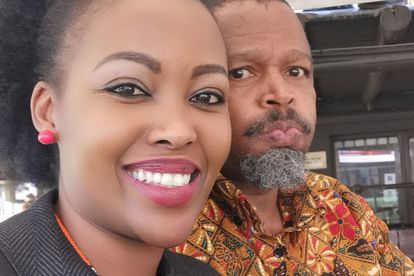 He took to his Twitter account and posted a series of images of himself and his new girlfriend and captioned the image:

“Sometimes we are encouraged to keep them in the background, in this era you have to be naive to not appreciate their value! The women in our lives are a force! Pearl Mbewe and OH I think she is so beautiful.”

KaNcube and Mbewe sent social media into a frenzy after one of his followers pointed out the legendary actor is old enough to be Mbewe’s father.

The actor made it clear that their age gap doesn’t bother him and said he was influenced by the late Shona Ferguson who showed off his actress wife Connie Ferguson every chance he got on social media.

“Post influenced by the memorial service from yesterday! It’s important to embrace your loved ones!”

KaNcube said his brand advisor girlfriend approached him and said she’ll work with him on a pro bono basis as she had great ideas for his brand. The rest was history.

The actor filed for divorce from Palesa Mboweni in June 2015 after eight months together. Mboweni allegedly cheated on the actor and torched his cars according to a December Drum Magazine article.

KaNcube served Mboweni with divorce papers even though she refused to sign them and wanted to make it work. A source close to the couple revealed:

“Palesa has mentioned before that she wants to be Mrs Maake KaNcube for life and isn’t ready to give up yet. She believes they can find a way to make things work.”

The actor told the publication that he believed his marriage was beyond repair and that he constantly felt disrespected by his former wife.