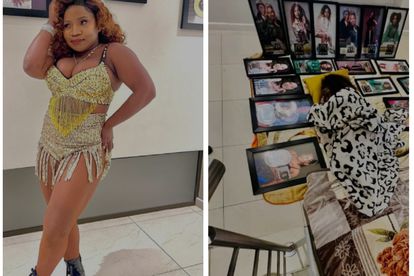 Makhadzi could not hold back her excitement after being awarded 18 plaques, she slept next to all of them. Image via @makhadzisa/Instagram

Makhadzi could not hold back her excitement after being awarded 18 plaques, she slept next to all of them. Image via @makhadzisa/Instagram

Dance music singer, Makhadzi, real name Ndivhudzannyi Ralivhona, is finally getting the recognition she and her day-one fans have been foghting for her to have. The Matorokisi hitmaker was awarded 18 gold and platinum plaques for her music last week.

In addition, for the first time in her career, she finally got nominated at the South African Music Awards (SAMAs)— something she called the awards for last year after she was snubbed.

“13 plaques I am in tears right now . All thanks to my fans for allways making sure everything I touch turns to platinum,” Makhadzi wrote on Instagram alongside a video.

The plaques were awarded to her by her record label, Open Mic Productions, during an interview on the Metro FM Drive Time show with Tbo Touch. However, her team was not done as she received more plaques the following day.

“When I thought 3 awards I received yesterday was enough matsiko nooo there is 15 more. Yes I slept next to my 18 awards of gold and platinums last night. I didn’t know what to do with my self,” the superstar wrote.

After years of hiping to get acknowledgement from the SAMAs, Makhadzi has finally been recognised.

Last year, the Ghanama singer called out the awards for not nominating her.

But this year, the singer has said that she is ecstatic after bagged three nominations for Sampra Artist of the Year, Music Video of the Year for Ghanama featuring Prince Benza and Best Collaboration for Zwivhuya featuring Jon Delinger.

According to Daily Sun, Brenden Maseko of Open Mic told the publication that she’s over the snubs and she’s celebrating her nominations.

“She’s over that. We understand these things involve a lot of processes and it may not go as an artist wishes. This is now old news.

“It’s a big achievement for her to be recognised, especially because the SAMAs are a big local brand, and for her to be part of it is a big deal,” he said.