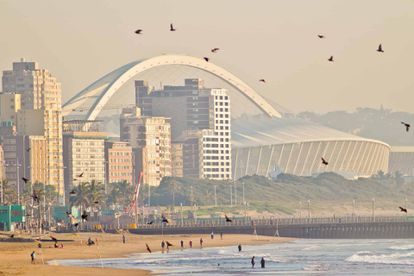 Over the weekend, there has been a fair bit of confusion regarding the Durban beachfront. This was only exacerbated by the eThekwini Municipality, who issued two conflicting statements on the matter within a few hours of each other.

The “Golden Mile” is an ultra-popular spot at the best of times, and when citizens were allowed to exercise outside of their home for the first time in a few weeks, people flocked to promenade on Friday. However, the sight of crowds and busy sidewalks seemed to spook the city council.

Can you visit Durban beachfront during lockdown Level 4?

Initially, eThekwini officials said they would close the Durban beachfront indefinitely. But, following a sensational bit of backtracking, a select group of people will be allowed to do their daily exercise here. The coastal path reopened on Sunday morning, with a steady amount of joggers and cyclists stretching their legs (or pedals).

But, who is allowed to take in the fresh sea air down the promenade? These are the strict rules in place…

It was made clear by the eThekwini mayor Mxolisi Kaunda that the promenade was being sanitised properly before welcoming residents back. He stated that the city did not want to “dice with people’s lives”.

“Everyone needs to be mindful of the fact that the city is the epicentre of this pandemic [in KZN]. We are going to embark on a deep cleaning and sanitising operation of the entire facility before we open it to the public. We cannot dice with people’s lives.”