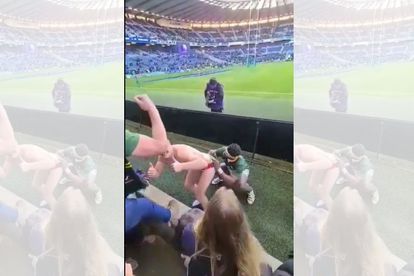 After the Springboks claimed victory over Scotland in Edinburgh on Saturday, 13 November, Springbok captain, Siya Kolisi signed a fan’s booty to the delight of fans in the stands and on the internet.

By the end of the 80 minutes, the Springboks had successfully cruised to a 30-15 victory, which followed on from the win against Wales in their opening match in Cardiff last weekend.

While celebrating the Springboks’ victory, Siya spotted a fan in the stands sporting a South African speedo – the same one Faf de Klerk confidently wore when the Springboks won the Rugby World Cup in 2019.

SA Rugby Magazine later shared the video on social media, and fans are loving it.

“Siya for president, just saying.,” said one Instagram user. “That spank at the end,” said another.

“What a man! He is my captain! Absolute legend,” others quipped.

The video has already clocked over 60 000 views on Instagram alone.

After the match Siya was in good spirits, saying that converting their opportunities into points was one of the key themes in the Bok camp this past week, and lauded his teammates for delivering on this.

“We didn’t change anything,” said Kolisi during post-match interviews. “The difference today was the way we used our opportunities, which we didn’t do as effectively against Australia and New Zealand.

“We scored two tries and there were times when we applied so much pressure they kicked the ball, and we won it back.

“That’s what Jacques [Nienaber] has been driving – to see the opportunities and use them, and we did that today.”

What’s next for the Bok squad?

The Bok squad will travel to London on Sunday for their final tour match against England.