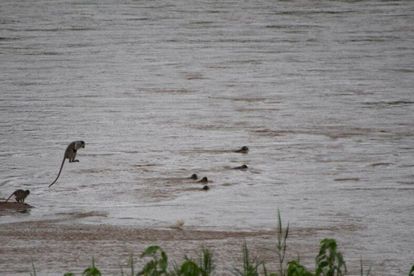 These brave vervet monkeys were caught on film swimming across a crocodile-infested river in KwaZulu-Natal: Image: Gavin Udal

These brave vervet monkeys were caught on film swimming across a crocodile-infested river in KwaZulu-Natal: Image: Gavin Udal

Even though South Africans are accustomed to seeing vervet monkeys leaping through the trees, a troop of vervet monkeys was filmed swimming across a swollen crocodile-infested river in what is described as a very rare event!

“In all my years guiding and being in the bush, I have never seen this,” he said.

It is also reported that the monkeys did make it across the river safely, even though it is not clear why they chose to do it in the first case.

“Were they being harassed by a predator, was it due to a lack of food source, or another troop pushing them out of their territory?” Udal asked.

Udal also said that the vervets entered the river, not where the current was strong, but rather “where there was an eddy and (then) swam into the current which pushed them out onto the opposite bank. Animals are way more intelligent than we give them credit for.”

Monkeys playing in a pool in Durban

Back in 2018, a troop of monkeys were caught on camera swimming in a backyard pool in Durban. Carol Malley said that her brother sent her the footage as it was a very hot day – with temperatures rising up to 40 degrees.

“My brother sent me this video of the local troop of monkeys having fun in his pool in La Lucia, Durban,” Carol said before noting what the monkeys look like while swimming underwater.

“Too hilarious how they actually swim underwater.”