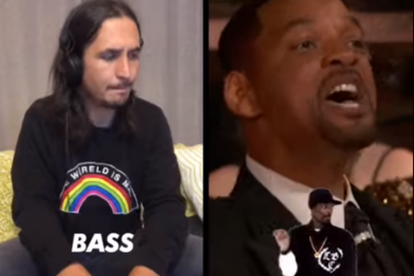 The Kiffness released a new remix about Will Smith’s Oscars slap. Images via Instagram @thekiffness

The Kiffness released a new remix about Will Smith’s Oscars slap. Images via Instagram @thekiffness

The Kiffness is known for his viral remix videos, and if you thought he would let the now infamous Will Smith Oscars slap go to waste, think again!

Johannesburg musician, producer and parody artist David Scott aka The Kiffness announced his latest Oscars-inspired remix on his Instagram account:

“Can FINALLY announce that the whole Oscars fiasco was just hype for my new single with @willsmith, “Keep My Wife’s Name (Out Your F****** Mouth)”. Available on all streaming platforms, link to full song in bio x.”

Fans and viewers of the Oscars were stunned when the I am Legend actor Will Smith slapped comedian and presenter Chris Rock at the Academy Awards ceremony on Sunday 27 March at the Dolby Theatre, in Los Angeles.

This after Rock made a “GI Jane 2 joke” pertaining to Smith’s wife Jada Pinkett Smith. Pinkett Smith suffers from hair loss due to alopecia, an auto-immune disorder that causes bald spots and hair loss.

Smith went on to win the Oscar for Best Actor for his role as the father of tennis star sisters Serena and Venus Williams in King Richard.

ALSO READ: The police were ‘ready to arrest’ Will Smith after Oscars slap, says producer

In case you missed the now viral moment during the Oscars…

He told Business Insider that some music lovers have paid over $100 (R1500) on BandCamp for the track.