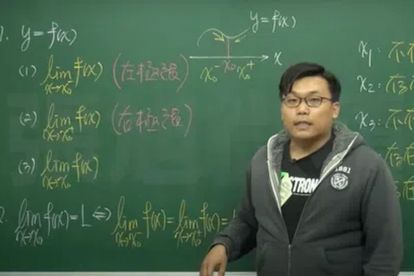 The 34-year-old – who also goes by the stage name Changhsu – reportedly fronts his profile with a cheeky “Play Hard Study Hard!” slogan. So far, there are hundreds of videos of him explaining calculus.

His videos are proving to be very popular as he clocked in almost 2 million views in total, making him a “successful fully-clothed content creator in a space dominated by nudity”.

Chang told Vice that a lot of people only see his marketing strategy and think it’s interesting.

But as it turns out, driving the absurd antics was sheer desperation, as Chang grappled with a personal crisis.

It is said that tuition centers (also known as cram schools) are “cut-throat” in Asia. Before 2020, Chang was running his own tutoring center in Hsinchu, a city in northern Taiwan, along with a few co-workers he had hired. But he was totally caught off-guard in February 2020, when one of his co-workers opened a new cram school right above his.

“They took all my students upstairs, so my cram school suddenly lost all its income and could no longer operate,” he said.

Chang was suddenly left with the teaching space and a lot of debt.

“The problem got so serious that at one point, I contemplated suicide,” Chang said. “I was simply in too much debt, and I wasn’t confident that I could repay it quickly.”

He later decided to start a new business where he could put his skills as a tutor to good use. He pivoted to online teaching, setting up a website that offers educational resources for students.

In March 2020, Chang started filming a ton of tutorial videos to share online. For months, he was making 30 to 40 videos a day, and had even started sleeping in his abandoned tuition center so he could resume filming once he woke up.

“If there’s anyone facing intense struggles right now, I hope that my story can give them some strength, so they can believe that if they persevere, one day, there will be hope,” he said.