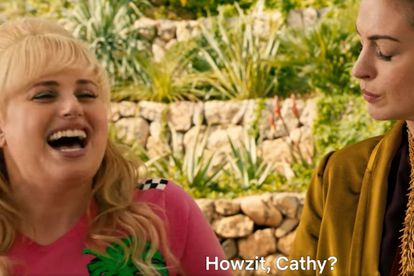 After The Hustle started streaming on Netflix, many noticed that Rebel Wilson speaks in an ‘Afrikaans’ accent in one scene.

The Pitch Perfect actress is no stranger to the South Africa, or Afrikaans for that matter, as she did reveal in an interview that she can say ‘Goeie More’ and ‘Hoe gaan dit met jou’.

Now, after Netflix shared a snippet from The Hustle (down below) in which Rebel talks about the Springboks and whatnot, the internet commended her for performance:

“I’m South African, English and Afrikaans my language. And she knocked it out of the park. Well done,” said one social media user. “She actually did well, I wasn’t watching the clip but had to look up when she started talking.”

Others mean that Rebel had them at ‘Howzit’.

“Great accent! Sounds genuine. She had me at howzit”.

“I’m South African and even I can’t do that.”

“She’s not bad, not an easy one to pull off. ‘Ice Cream’ sounded a bitt Scottish though,” said another.

“Sounds like a South African English person who lived in an Afrikaans dominated area. Loved the movie.”

Meanwhile, others said that she did a way better job than other movie stars who have tried to perfect the South African accent over time. Leonardo DiCaprio and Matt Damon have tried in the past, according to Cape Town etc:

“She definitely did a way better job than some who have been cast in roles of South African parts. Her Australian accent helps a little. Good job Rebel for the excellent effort,” said another.

Others were not as impressed:

“Terrible. No foreign actor has ever been able to master the Afrikaans South African accent.”

You can watch the clip over there and decide for yourself: