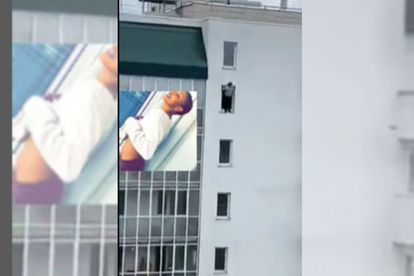 Ugandan model and influencer Karungi Monic aka Mona Kizz committed suicide on Sunday 1 May after the Dubai Porta Potty video of her went viral last week. Image via Twitter @giftgrace01

Ugandan model and influencer Karungi Monic aka Mona Kizz committed suicide on Sunday 1 May after the Dubai Porta Potty video of her went viral last week. Image via Twitter @giftgrace01

The viral video was discovered by a TikTok user who titled it “Dubai Porta Potty” — an alarming and upsetting sexual trend rumoured taking place among influencers and the elite in the United Arab Emirates.

The Dubai Porta Potty video which shows a man excreting into a woman’s is rumoured to be something that slay queens or influencers and other young women do in exchange for money or gifts.

Older men who are known as sugar daddies or blessers give money or luxury gifts to attractive young women in return for sexual favours.

While there’s no proof this goes on in Dubai, it’s merely a rumour that’s taken over the internet.

THE SLAY QUEEN WHO COMMITTED SUICIDE IN DUBAI

According to Routineblast.com the slay queen who ended her life was the 24-year-old Ugandan woman named Karungi Monic aka Mona Kizz.

She reportedly jumped off an Al Fahad building in Dubai and killed herself instantly.

The shocking video which circulated on Twitter on Sunday (1 May) was shot by witnesses from a nearby building in Dubai.

In the video, the 23-year-old is seen standing on the window of what appears to be a staircase, holding both sides of the wall then suddenly lets go of the window and jumps.