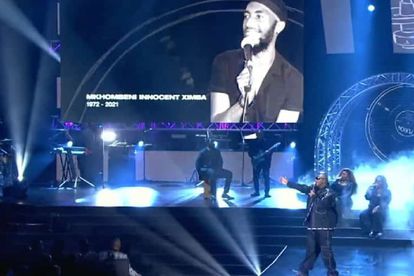 An author is threatening to sue the SAMAs for ‘killing’ him. Image via Twitter @innocentximba

An author is threatening to sue the SAMAs for ‘killing’ him. Image via Twitter @innocentximba

Amid all the criticism and controversy around the South African Music Awards (SAMAs) which took place last weekend on 27 and 28 August at the SunCity Superbowl, an author and business coach is breathing fire after the organisers paid tribute to him and declared him dead.

Innocent Ximba from Ekurhuleni, Gauteng, told Daily Sun that he has been receiving calls and text messages after his picture and name were used tribute segment on Sunday.

According to the publication, author and business coach Innocent Ximba is also unhappy with the awards ceremony.

“My name, surname and my picture were broadcasted live on the tribute slot.

Further explaining, he shared the impact this has had on his career. Ximba assists school kids preparing for their examinations. But since the SAMAs incident, he said that he was asked to stop coming to the school he tutors at because the news of the incident had reached the WhatsApp groups of the pupils.

“I’m already dealing with a lot. I am already answering to quite a lot of people, especially the institutions that I have been working with. I am so upset because they don’t even know me so, why on earth would they do this to me?” said Innocent.

Ximba added that he is getting harassed on social media as people are accusing him of being an attention seeker, ghost and impostor.

“In the black community, accusations of ghosts and witchcraft are taken seriously and persons accused of such are usually killed by the community.”

As a result, Ximba is planning to take legal action against the SAMAs.

“Because of the Protection of Personal Information Act, I will be taking them to court and would like to get help with the legal fees since the lawyers want an upfront payment, or even maybe someone who can do the case pro-bono.”

‘THIS IS A HUMAN ERROR’

In response, Lesley Mofokeng from the South African Music Awards said that they extend their humble apologies to Ximba

“It has been brought to our attention that while the tribute was aimed for Mkhombeni Innocent Ximba who was born in Nquthu, a photo of a man named Innocent Ximba from Ekurhuleni was used by mistake.

“This is a human error that was introduced during production which relied on the internet to source pictures. Once again we apologise unreservedly to Innocent Ximba for the usage of his image and the inconvenience, distress or humiliation he and his family may have suffered,” said Mofokeng.

Since airing at the weekend, the SAMAs have received heavy criticism. Recently retired artist, Zakes Bantwini, whose hit Osama won the Best Collaboration and Highest Airplay Awards, said the 28th instalment had no integrity in the way the awards are being produced, the planning, the awarding of artists and in extending the basic courtesy of respect to the artists.

Amapiano musician Lady Du and DJ Maphorisa also lashed out at the organisers. Lady Du accused the SAMAs of having “gatekeepers” while Maphorisa accused the awards show of “cheating the numbers”.

This came after social media users accused SAMA bosses of sabotaging Makhadzi whose performance of her hit track, MaGear, was cut short. The SAMPRA Artist of the Year Award was also a huge talking point among viewers as Haksul Muziq, whom many do not know, beat the likes of Makhadzi, Emtee and A-Reece for the top honour.