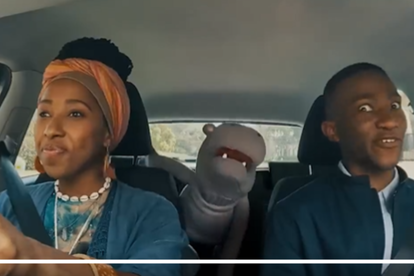 Insurance company Outsurance just lost a bid to get a new Hippo ad off from all platforms. The company dragged Hippo to court after Hippo aired a parody of Outsurance’s popular advertisement. According to OUTsurance, in the parody, Hippo was implying that their company “is overcharging customers”.

A Pretoria High Court magistrate has however dismissed the case. The insurance company has also been ordered to pay for Hippo’s legal counsels’ legal fees.

OUTsurance has been left licking their wounds after a swift attempt to get a popular Hippo ad removed from the airwaves.

The insurance company took Hippo to court shortly after the quote comparison company aired a parody advertisement that features a Katlego Maboe lookalike discussing insurance with a young woman while they took a drive.

Shortly into the drive, a Hippo pops up in the backseat and informs the driver that she can in fact get a better quote which results in her kicking the fake Maboe out of her car.

The ad is an undeniable dig at the popular insurance provider.

After the ad went viral on social media, Outsurance took Hippo to court claiming that the Hippo ad implies that they are overcharging customers and infringed upon its common law and intellectual property rights.

According to Business Insider, Hippo however argued that OUTsurance had not provided sufficient information and evidence for the relief sought in its papers. It failed to launch the application timeously and had not contravened any act or legislation, including the FAIS General Code of Conduct, the SAIA Code of Conduct and the ARB Codes of Advertising.

Agreeing with this, Judge Mbokwe dismissed the matter due to lack of urgency and ordered OUTsurance to pay clients’ legal costs, including the costs of two counsel on Monday this week.

Meanwhile, Bradley Du Chenne, CEO of Hippo had this to say:

“The point of the advert is to educate South Africans that just because an advert features a happy customer telling you how much they’re saving on their car insurance, doesn’t necessarily mean that you will save. You could possibly save more with another insurer and you’ll only find out if you are getting the best deal if you compare quotes from multiple top SA insurers side by side. That’s where http://Hippo.co.za can help. Hippo is not an insurance company. It just provides a comparison tool that fetches quotes from 11 insurers (like Virseker, King Price, Pineapple, iWyze and Dotsure) and presents them to the consumer for comparison to help them make an informed decision. After that, the choice is theirs to make. While there are a few insurers missing from our platform, they have been invited and it’s their call not to participate.”