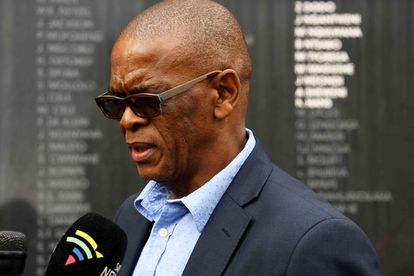 What does suspended ANC secretary-general Ace Magashule do when he’s not fraternising with EFF leaders?

The politician was recently posted on Sandton Thai Massage’s Instagram page. In the picture, he’s flanked by the parlour’s purported owners Thomas and Kena Mukala.

The caption’s post says Magashule and his team were treated to a “full body makeover… for extra hardworking men under serious stress”.

What stress could Ace Magashule be under? Well, Magashule and 16 others, including Edwin Sodi, have been charged with corruption over the R255 million Free State asbestos tender.

In another post, Magashule can been seen admiring his face in front of a mirror, while a member of his team compliments him.

In another clip, the unknown man sings the establishment’s praises.

“You guys are running a very good ship here. I love the beds and the hands are very good. You can be rest assured of the support from my side and the networks,” the man is heard saying as he exits one of the massage rooms.

Ace Magashule’s massage spot seems to be owned by Pastor Thomas Mukala and his wife Kena. Thomas went viral in May this year over his “your wife has a right to your phone and money” advice.

“What are you hiding? How come she doesn’t know your password? Either you are hiding a woman or money deals or misusing your money. Marriage requires full disclosure,” he said in a Facebook post.

David Mahlobo did it first

The establishment, which was later described as a brothel by the Hawks, was owned by rhino poacher Guan Jiang Guang, a Chinese national.