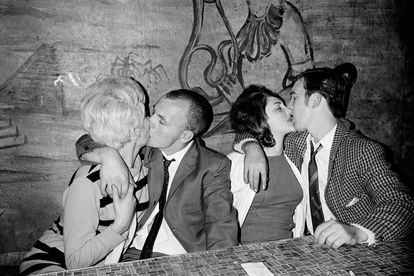 The Daily Mail recently shared photos taken during the 1960s which showed South Africans partying in illegal underground clubs and bars. The photos are part of the Billy Monk Collection.

Apartheid South African in the 1960s

“He and the people in the photographs conspired to do these amazing things.”

David Goldblatt, from the short documentary ‘Billy Monk – Shot in the Dark’.

The photo above shows one of the regular patrons at The Catacombs night club on Bree Street, Cape Town as she shows off the popular hairdo of the time, the famous Beehive.

Monk’s photos were also exhibited at The Hive Spring, Hong Kong back in September 2019 under the title, “Defiance and Decadence Under Apartheid”. The exhibition included 20 prints, eight of which have never been published before.

The photos were taken in the sixties inside underground bars and nightclubs, approximately 20 years after South Africa established its discriminatory apartheid policy and show ordinary citizens flouting the country’s laws against racial mixing.

Monk was a doorman at the time, and explained that the taught himself photography as a means to earn additional income. Chris Jewers from Daily Mail writes:

“Images of black patrons linking arms with their white friends whilst pouring shots of alcohol together would have appalled the ruling national party, at a time when the government were forcing 3.5 million black South Africans from their homes to live in segregated neighbourhoods”.

Paul Gordon, who had once shared a studio space with Monk, is the man responsible for bringing Monk’s photos to the world, with the first exhibition of the Billy Monk Collection taking place in 1982.

“Bottles of Coca Cola and brandy are strewn about the tables and floors of The Catacombs nightclub, Cape Town, in just about every Billy Monk photograph. Brandy and Coke was the order of the day – here’s a short video that explains why”.

The image below was taken at The Catacombs in Cape Town on 4 October 1968. The photo was published in The Telegraph in February of 2012, with  Lucy Davies writing:

“‘A clean heart and a cheerful spirit’ reads the rainbow-painted script on the rough white wall; a simplification of Psalm 51’s prayer for redemption of sin. But there is no chance of sin’s remission here.”

“A snapshot of the infamous Catacombs nightclub in Cape Town’s dockside district in the late ’60s, illustrated by Billy Monk’s evocative black and white photographs”.

Sadly, Monk lost in life in the eighties when he was fatally shot during an argument, but his photos live on. Art critic Ashraf Jamal explains that Monk captured “the lives of people redeemed from Apartheid’s scrutiny”.

“For in these hidden worlds no one cared about status, caste, sexual preference. […] Monk’s pictures evoke the singularity of the moment, the humanity of his men and women, the pleasure of lives freed – if only for a moment – from the burden of history.”