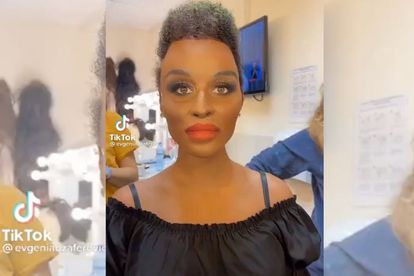 Image via: Screenshot from video.

Image via: Screenshot from video.

Needless to say, once video clips of the performance hit Twitter several social media users were upset by the act. Another video, which shows the performer discarding the mask, hair and makeup after the performance also infuriated tweeps.

“Their whole show is literally based on black face and black fishing. It’s disgusting. Shut it down all of it…” said one user.

“Why could you not just perform the song, WITHOUT black face? If you wanted Nomcebo to perform you could have arranged that? Fly the good sis out? Does everyone in this video think this is okay? How the [expletive]? This racks up LEVELS of racism and disrespect. Levels,” added another.

Other users were less inclined to see the performance as an act of racism.

Before long, controversial South African comedian Leon Schuster’s name was mentioned as part of the discourse.

‘WE LAUGHED ALONG WITH LEON SCHUSTER’

Several of Schuster’s movies have been called out for their racial insensitivity, as he performs in blackface for the entire running time in some of them with Mama Jack being a prime example.

In June 2020, nine of Schuster films were removed from Showmax after the streaming found them to be racially insensitive. “The removal of his movies has sparked fierce debate on social media foisting Schuster back into the public eye,” said The South African’s James Richardson at the time. The same thing has occurred because of the viral blackface video,

“Saying its okay to wear black face to perform is like saying it’s okay to use the N-word on a song. I see most South Africans don’t know what black face is and what it was used for.. that’s why we laughed along with Leon Schuster for so long before seeing the problem,” said a social media user.

Social media user put on their detective hats and discovered that the blackface, which is evident in the video clips, was not a once-off occurrence. Other acts have also donned costumes that caricature black musicians, including Drake.