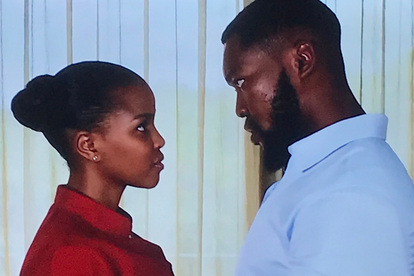 There are patterns when it comes to abuse… and often the victim refuses to see them because they are generally being carried out by a person whom they love.

Clive has not been the biggest fan of Georgina and Akhona’s friendship… However, the way he is treating the situation has raised red flags!

After having gone out with Georgina, much to Clive’s disapproval… Akhona came home to a furious fiancé who called off their wedding… what a shocker!

To cancel a whole entire wedding because your woman hung with a friend of whom you do not approve of, and to label it “disrespectful” … is a little much, isn’t it?

The level of control Clive takes over Akhona is not on. It is the typical trait of an abuser and The Queen fans are screaming for Akhona to run in the opposite direction.

FAN TAKE TO THE TWITTER STREETS TO AIR THEIR VIEWS

Clive needs to get his act together because his behaviour is not sitting well with The Queen fans. Akhona is her own human being and Clive does not own her!

Seeing the way Clive lashed out, peeps had to take it to the Twitter streets to discuss the matter. These are pure abuser vibes and viewers are praying Akhona sees it.

It always starts with an unreasonable level of control that quickly spirals out of control… You can’t call abuse love!

TAKE A LOOK AT WHAT SOME HAD TO SAY

“Clive is so controlling I can’t EVEN-  #TheQueenMzansi”

“Yes Clive is a red flag???????????? but he is right about Goergina. This is why black people are never successful in business. Support your friends business by paying not taking advantage of them. But yall are not ready for this conversation #TheQueenMzansi”