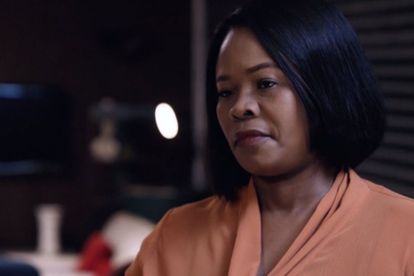 Legendary actress Nthati Moshesh who plays the villainous role of Mary Ndlovu on Isono recently opened up about her struggles with gun scenes.

The actress who’s been in the entertainment industry for over three decades went on her Instagram account and said she is a pacifist who has a phobia for guns.

Her post surprised her followers and industry friends as she appears to be a professional in her gun scenes.

Moshesh’s current role on Isono has a great number of gun scenes.

Mary Ndlovu appears to be a classy lady and a saint who adores her children at her orphanage (House of Grace).

But underneath her smiles and nobility lies a cold-hearted criminal who runs an illegal child trafficking and adoption ring.

The actress also opened up to Drum Magazine in 2019 about being unemployed and hitting a slump after Mzansi Magic’s Saints and Sinners came to an end.

She told the publication that she wanted to give up acting and felt like there was something else that could bring her more money,

But acting is all she knows and love.

Moshesh also stated that being too experienced in the industry can work against you as you intimidate people.

She said she never thought she’d ever be broke when she was younger because she was working all the time.

The actress said she was unemployed for almost a year and relied on her family’s handouts to survive.

She landed a theatre role in Zakes Mda’s You Fool, How Can the Sky Fall after Mzansi Magic’s Saints and Sinners.

But the play came to an end after four months, and she was broke again.

I went through an eight-month dry spell where I had absolutely no work.

You know how our industry works – if you don’t work, you don’t eat. My finances were shocking.

I had maxed out my credit card and I was relying on my family for handouts. Man, you have no idea.

Also read: Petronella Tshuma reflects on breaking up with her second baby daddy