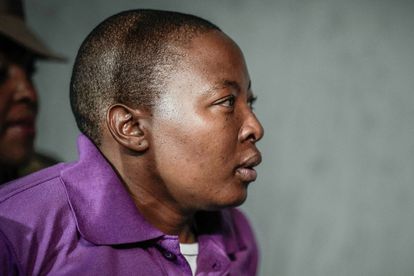 Lerato Mvelase as Nomusa on ‘The Wife’. Image: Supplied/ Showmax

Lerato Mvelase as Nomusa on ‘The Wife’. Image: Supplied/ Showmax

TV industry commentator Kgopolo Phil Mphela sang the praises of actress Lerato Mvelase on Twitter on Thursday 10 March, for her performance as Nomusa in Season 2 of The Wife, which is still the most-watched show on Showmax.

Mphela called the raunchy scene that was aired this week, “the most explicit sex scene ever from a South African production” between Khanyi Mbau’s Zandile and Mondli Makhoba’s Nkosana.

ABOUT LERATO MVELASE AND HER ROLE

Mvelase is an Emmy nominee for her performance as Katlego in Home Affairs and was SAFTA nominated for her roles as Sibongile in Isibaya and Lillian in the Oscar-shortlisted film Life, Above All.

In The Wife, she plays Nomusa: The woman who replaced Zandile (Mbau) in her jail cell when the Zulu brothers broke her out at the end of Season 1. She’s also the woman who Nkosana keeps visiting every week to keep up appearances – although he’s not fooling the police commissioner anymore…

We caught up with Mvelase to find out more:

How did you react when you found out you’d gotten the role?

It was obviously very exciting for me, seeing that The Wife is one of the most spoken about productions at the moment. Which actor doesn’t want to be in the most popular show of the moment, to share your talent with the rest of South Africa?

Tell us about your character, Nomusa?

She’s a single mom who lives with her mother and her sickly son. He needs a very expensive surgery, which she obviously cannot afford because she works as a cleaner. When Nkosana approaches her, it’s tit for tat: I do this for you; you do that for me.

So she’s an honest working mum who is now having to go into jail to be a prisoner, so that she can save her child’s life.

Was that a hard decision for her? To give up her freedom for her son’s well-being?

It wasn’t even anything that she had to think about. She wants to save her child: if the opportunity comes, even if it comes at her own expense, she’s doing it without even flinching. She loves her child that much.

But it is at her own expense, isn’t it? She doesn’t have it easy this season.

So you’ve got this woman who makes an honest living, a woman who obviously has worked hard for her own integrity in her own little world, right? And all of that has been attenuated to ‘prisoner.’

Everything that you’ve worked hard for means absolutely nothing. She’s nothing but a prisoner now.
But she’s not a criminal.

She’s faced with cellmates who are constantly questioning her, telling her, ‘You are not who you say you are.’ And she can’t say, ‘I’m not that person’ because she doesn’t want to ruin the opportunity of having her son getting the surgery that he needs.

I guess for every parent, you go through things and sometimes we have to be stoic about our own situations. Sometimes you can’t be weak; you have to face the challenges of your life. So she’s in jail and she’s just got to do what she’s got to do. It’s what parents have to do; they sacrifice.

Nomusa isn’t in Zandile ‘The Resolute’, Dudu Busani-Dube’s book that inspired Season 2 of ‘The Wife’. What does she add to the story in the series?

She brings a different dynamic, which parents will relate to. As parents, we are often so busy raising our kids and trying to survive that we don’t take a moment to acknowledge how much we actually do for our families to work, for this machine to keep moving.

I hope Nomusa’s story will also help young people to see the daily sacrifices parents have to make.
So this is one of those storylines that really touches on the essence of who we are as human beings. And I guess that’s why many people relate to this character and her sacrifice.

How does Nomusa differ from other characters you’ve played?

When I think of all the characters that I’ve played, what makes Nomusa different is that within her weakness, we see so much strength.

I’ve played characters who are strong, overtly strong. And then here Nomusa is: this woman who people might look at and be like, ‘I have no confidence in her.’

We know she’s not a gangster. She’s not going to be stabbing anyone in the jail cell. She’s probably not going to be fighting anybody. She doesn’t want trouble. She just wants to be here, to serve the sentence she needs to serve.

It’s just unfortunate that she’s now exposed to the dynamics of a jail cell. There’s no peace. You wake up and someone wants to stab you. What are you going to do when you’ve never stabbed anyone? When you’ve never had to confront people violently or aggressively and now you’re faced with that?

You know, when you’re thinking of jail, you have a preconceived idea of what happens to people in jail and how they have to be butch and boisterous and aggressive. But Nomusa is literally the opposite of that, which makes it even harder for her.

But I love that, because it’s such a challenge.

If you went to jail, what would it be for?

If you weren’t acting this role, which would you have loved to play?

Funny you should ask that. When I posted about being on The Wife, somebody asked me, ‘Why would you take such a small role for someone of your calibre?’

The person is not in the industry, so for them, it’s really an innocent question. So I decided to respond because I didn’t think he meant any harm. And I said to him, ‘I don’t come from a school of thought that you need to play a lead to make an impact. I believe there are no small roles, only small actors.

Because I approach characters in that light, I could have been a warden. But let me tell you, I would have been the best warden in that scene.

So do I wish to play another character? No, I’m exactly where I should be

What’s next for Nomusa, especially in terms of her growing relationship with Nkosana?

Watch Lerato as Nomusa in The Wife S2 on Thursdays on Showmax.

ALSO READ:TRAILBLAZER: Getting to know ‘The Wife’ actor Sipho Ndlovu