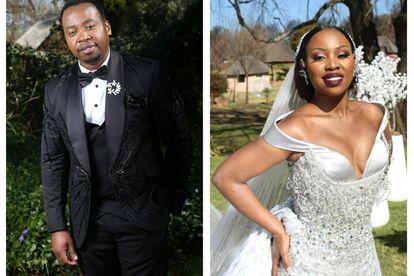 The lovebirds may not get theirhappy ending after Mazwi declared his love for Tracy. Images via Twitter: @Gen_legacy

The lovebirds may not get theirhappy ending after Mazwi declared his love for Tracy. Images via Twitter: @Gen_legacy

On Wednesday’s (5 October) episode of SABC 1’s Generations: The Legacy, Mazwi (played by Musa Ngema) and Fikile (played by Refilwe Madumo) were finally going to say their ‘I Do’s’ until Fikile caught wind of what was happening and became the runaway bride.

When the Pastor that was officiating their marriage told Mazwi to say his vows, Mazwi told Fikile he failed to put pen to paper. He disguised his lack of vows to the type of person Fikile is.

Mazwi decided to use his ‘friend’ Tracy as inspiration for his vows and if looks could kill, he would be dead by now.

“It’s always been you. You believed in me, you challenged me, you’ve stuck by me. You saw me at my worst and still, you stayed with me…

You never ran away from me. You stick it out. You fight me because you’re honest with me. Whenever I need it, you’re always there to lift me up. You’re my person. I am standing here today because of you”

Mazwi said in his vows

At this point both Fikile and Tracy were aware that Mazwi was not talking about his bride. Fikile turned around to see this person these vows may be for because he kept glancing at Tracy.

She slowly let his hand go and quickly ran out of the venue at the sheer embarrassment Mazwi was putting her through.

Mazwi followed Fikile back to the house where apologised for what just happened. All Fikile asked was why he was apologising.

She asked him who he directed the vows to because he was clearly not speaking about her. When the groom tried to play it cool and reasure her that he was speaking to her and not Sphesihle (the number one suspect in Fikile’s s eyes), Fikile told him not to lie to her.

Mazwi then begged her to not let what happened get to her because they can do it. Unlucky for him, when the episode ended, Fikile questioned Mazwi’s love for her. Is the wedding going to carry on or Fikile is done with Mazwi and also what does this mean for Mazwi and Tracy?