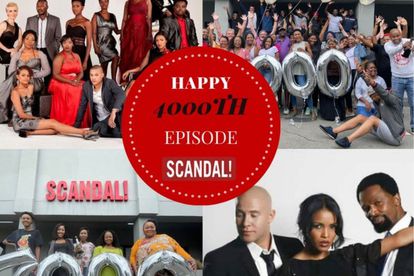 The popular soapie is the longest-running show on the channel and the most viewed soapie.

Popular most-watched soapie – Scandal! celebrated its 4000th episode on Tuesday night after being flighted for 17 years on e.tv.

Actress and head writer for the show – Grace Mahlaba told the publication that Ochre (the production company) is super proud of the team of brilliant professionals.

“There have been so many unforgettable highlights in the story like when Daniel Nyathi pretended he could not walk and was then miraculously cured.”

“Another highlight was when Abigail exploded in her car and Dintle made love to Mangi in prison.”

“Who can forget how Quinton ripped off Thembeka’s gown to reveal her fake pregnancy tummy?”

“The mighty Nyathis, the brilliant Langas, the ruthless Mambas, and the beloved Ngemas.”

“The show recently refreshed its set and introduced the Kubekas to keep the storyline relevant and provide audiences with intriguing content.”

Scandal! has kept the number one position on e.tv for years with an average of 5 million viewers every night according to the TVSA’s primetime viewing figures.

The soapie stars talented actors such as Fana Mokoena, Mvelo Makhaya, Mapaseka Koetle-Nyokong and many more.

Also read:‘Scandal!’: Cat’s out of the bag… Mbali Khubeka is living a double life

“Congrats guys, it’s been a wild ride. Here’s to many more Scandal! nights, much love from #etvScandal.”

“Thank you guys for giving us scandals after Scandal!’s on weekdays.”

“Can we see Daniel and Mangi please then Shakira n his brother?”

Also read:James Sithole joins the cast of ‘Scandal!’ as the villainous Mdala